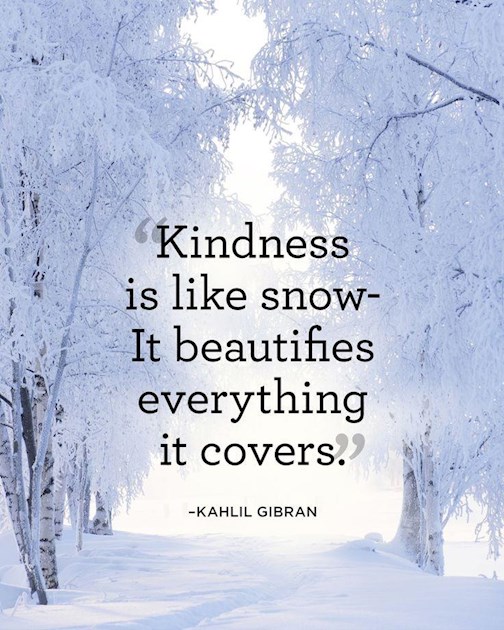 Snow is so beautiful all the time however when all is quiet and peaceful❄️I think it's one of Nature's Best Creations..

Luna_Child
To view profiles and participate in discussions please or .
32 Replies
•

Stick together be a team and be Beautiful...❄️

I do love Kahlil Gibran poetry. I agree it's very profound. Thank you for sharing.

Lovely words with a beautiful, magical backround. Snow does appear magical when the first snow falls and blankets the ground. We will all remember making footprints in fresh snow.

Yes footprints 👣. I remember as a child making these huge igloos with my brother's. You could crawl inside them. They were so cool. My parents would take us Tobogganing and then snowmen were huge that we would build. I love the fresh soft snow that you can blow instead of the kind that sticks. Do you get lots of snow?

We do depending on what Mother Nature decides to do that day!!☃️⛷️❄️🏂🏔️❄️⛄⛺

RoadRunner44 in reply to Luna_Child2 years ago

No, unfortunately. As a child living in Wales in the 1950s snow was much more common each Winter. I really believe climate change is impacting on our weather all over the world.My grandmother used to mention how she and her sisters used to go ice-skating on a local pond which would stay as hard as rock for weeks. Not nowadays.

Yes I ice skated on the local pond. It was a challenge because my ankles were small and never learned to skate because of it. One time my friends left me in the middle of the pond and I crawled back. I was in high school once upon a time. It does usually snow sometimes a lot sometimes a little. Feb/ March are the worse months. There's a huge Beautiful skating rink the capital city built about 10 years ago. Lights music Haven Brother's Hot Weiner's..and other foods and beverages. It's simply gorgeous.

You haven't lived until you've had a hot weiner....

RoadRunner44 in reply to Luna_Child2 years ago

My state actually invented them along with autocrat coffee syrup, and much more. They are so deliciously bad for you. My aunt used to take me. She'd call me and say "let's go for hot Weiner's" I'd pick her up. Yummy. "New York System" was the name of the deli.. Hot Weiner's! I'm not from New York that's the name of the deli. So good!!!

I love snow as long as we don’t have to travel out in it LOL. then everything comes to a standstill, 😳

Yes I dislike being stranded. People lose their driving skills. What's your favorite memory of snow?

in reply to Luna_Child2 years ago

Not got many favourite ones I’m afraid, maybe it’s because in Wales we’ve got hills everywhere and we get stranded in snow a lot lol

I remember my OH going to work one night on police duty and him not coming home for a week😳. His patrol car was. buried under the snow and him and a few others had to stay in the station until the drifts melted a bit, neighbours used to bring food into them so they didn’t starve. LOL I. think it was the early 80,‘S .

Yea cars end up abandoned sometimes. The Blizzard of 1978 kept people without power for weeks and home from work and school.

in reply to 2 years ago

Yes,that is so true xxxx

Super. I love that quotation Luna_Child!

Kahlil Gibran poetry is pretty. What Is your favorite memory of snow?

Thank you for all of your kindness, Luna_Child. Let it snow! ❄️🌨☃️❄️

Anytime, I'm here 😊👍 Snow is pretty and my dog's love it. ☃️🌞. They chase each other. It'll be interesting to see how the puppy reacts. ❄️❄️

What's your best memory of snow?

in reply to Luna_Child2 years ago

It is so fun to watch dogs play in the snow! One of my favourite memories of snow...making underground tunnels and a fort inside a huge snow bank with my sister and the boys who lived across the road. There were some years during the 70s when we had extreme amounts of snow. ❄️❄️Thanks for asking!❄️❄️

Jerry what's your best memory of snow of you've had the pleasure of playing in it as a child or adult?

Luna_Child in reply to Narwhal102 years ago

True. There are no 2 snowflakes alike. ❄️

We have some beautiful snow stories going here.Please join us. What's your memory of snow? ❄️❄️❄️☃️⛸️⛸️☃️🏂

Narwhal10 in reply to Luna_Child2 years ago

Gosh there was one as a child, I must have been 7 and we spent most of the day sledging down the hill. All wrapped up warm in snowsuits and wellies. No school. Lots of my friends who were neighbours came and played it was a really magical time 😊❄️

Luna_Child in reply to Hb20032 years ago

That's fun throwing snowballs with your brother 😊❄️...a big part of having fun in the snow and one kids and adults love doing. The funniest thing is making a snowball and putting in your freezer all winter. 😊Thanks for sharing ☃️⛸️⛷️❄️

Hb2003 in reply to Luna_Child2 years ago

Luna_Child in reply to Hb20032 years ago

Help more than u realize

U help.mote than I may ever know

Snkrkellng and laying on the beach. Feel selfish whilr all I deal with thr cold

Sounds beautiful being in the Caribbean. Enjoy that beautiful weather. 🏖️⛱️🌊

Hi I remember our kitten and his sister down the road playing in the snow on their very first winter, they were funny xxxx

my job and am looking for a new one (which I have been for a long time) so that's obviously a big...

instead. I need help and advice. I have been very all over the place since quarantine started and...

keep us off thinking about our Anxiety and Depression etc..for a bit....answer 1 or all, whatever...

WHAT I’M DOING TO BE CREATIVE WITH MY TIME

Greetings, With a lot of time on my hands while social distancing, I decided to think “outside of...