While walking, I passed this lovely m... - Positive Wellbein... 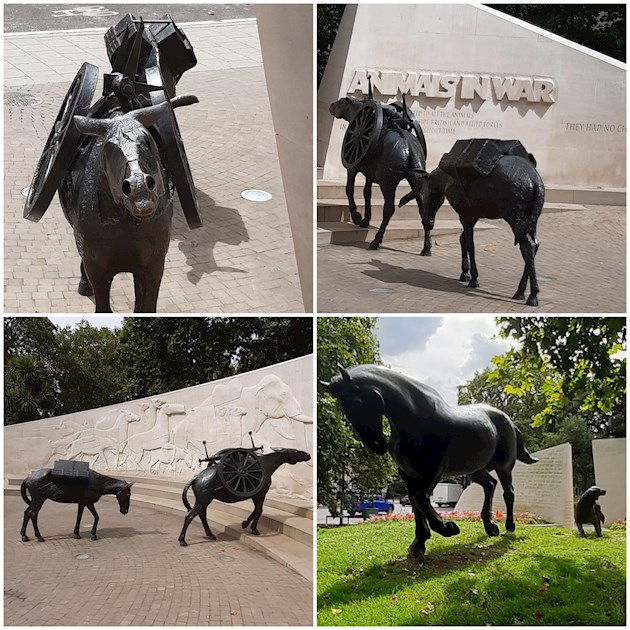 Dedicated to the animals lost in wars., I was moved by one simple line, that you can just see the start of, in the top right photo, that reads, They had no choice .

Bazzak
Reading Rabbits
To view profiles and participate in discussions please or .
30 Replies
•

What a fantastic monument Bazzak. Millions of horses and other animals died in both World Wars. When you think of how frightened they would have been in the gun and cannon fire in poor conditions but the men where devoted to their horses and mules. A fitting memorial, thanks for sharing. 👍🌈

Much more impressive in real life, you can walk around it, touch and be part of it. Xx

You must get a real sense of what they went through. 👍😊

Lovely photos Bazz with a touch of sadness though. It is a fact that animals through the ages have played a major part in our lives. I hadn't realized there was a memorium to animals in London and am so glad these were made and stand in a place of recognition as a reminder of their contribution. Many, many thanks.

A poignant reminder of the service of these wonderful animals. Where would the world have been without them and other animals. Thanks for sharing. x

What a beautiful monument Bazzak. I do remember seeing it on one visit to London and it really is so sad. I remember crying at my local cenotaph several years ago when I saw a floral wreath placed among the others with the message that it was for all the horses which had suffered and died in both world wars.

Of course we rightfully remember and respect the human beings who so bravely lost their lives in conflict but we should also rightly honour these noble beasts who, as the monument says 'had no choice'. Thanks so much for posting that! 🙏

There are some beautiful memorials going up nowadays, and I haven't see most of them, so thank you for posting. I doubt I will ever visit London again, although at one time in my life I was there every day.

I miss going there and visiting the Museums, Art Galleries and great parks, changing of the Guards, both at Buckingham Palace and Horse Guards. I miss Theatreland too, and Regent Street and Oxford Street.

Life has changed immensely for me, I'm now in West Wales, and still immersed in History. This time it's Coastal Command, which operated from Pembroke Dock, mainly with Sunderland Flying boats and Catalina Seaplanes.

It also built Erebus, whose remains were found up in Northern Canada a few years ago, along with those of Terror, both of which were charged with finding the Northwest Passage.

How long has that been there I've not been up to London for many years, I'd love to see that, it reminds me of the film War Horse, which depicted just what these beautiful animals went through , and don't forget the dogs too.

BazzakReading Rabbits in reply to 3 years ago

2004 by Proncess Anne, the photo of the horse on the grass, has a statue of a dog behind him xx

in reply to Bazzak3 years ago

They really do have no choice do they? It's heartbreaking to think of the fear and pain that they must suffer

This is lovely. Thank you for posting this as I never knew it existed.

Beautiful monuments to the animals and the plaque is correct, they didn't have a choice 😊

Ooh! so sad. I know horses were amazing during the wars. I am very interested in the great wars, particularly the 1st. I know the film War Horse is amazing but I can't bring myself to watch it. I can't read about the animals either, it is too upsetting but this monument is great. It proves their work was appreciated and celebrated and they will never be forgotten. x

Where is that? Beautiful!

BazzakReading Rabbits in reply to Stinkpot3 years ago

Park Lane , by Hyde park London, whats lovely is the fact that you can walk through it, and so it makes it very tactile. Xx

Hi thanks for showing the wonderful photo. No chance of me seeing it now. Never watched war horse as it would upset me to much. Many years ago I learnt to ride(I was fit then) I had never been on a horse,the power and strength was overpowering.sadly RA kicked in. We occasionally see horses ridden here and as they pass I still sense there spirit and strength.

Very beautiful but at the same time chilling.

‘They had no choice’. No other words needed, such brave and loyal creatures. They must have saved thousands of human lives, l have no idea how they managed, they must have been terrified with all the noise, smells, sights and the physical pain!

On a lighter note I actually worked in Brick Street just off of Park Lane. This was when Baron Studios were there just after Baron had died. £10.00 a week salary! What a joke now, it was enough though to fly to Europe for my holidays. I always had money in my pocket.

Wishing everyone a wonderful day, Tim.

Good old days, in the early 60s, when I was still at school (14), I got a weekend job as a potman at the local working man club. £2 a session, Saturday lunch and eveving and Sunday lunch, part of the job became running across the road to the bookies to put bets on club members. I was a no lose situation, if they lost, they lost, but if they won I got a tip!😁. I was making 10 to12 pounds a weekend, started proper work 2 years later earning £6 pounds a week! And stayed there for 52 years.🙂.

Sorry Tim that was potman not postman doh productive text. 🙂

😅 l did wonder for a split second!

Sometimes my mobile has its own agenda especially when I hit two keys at the same time! 🤔🧐

A beautiful monument. Also a poignant reminder that not only the human cost should be remembered.

Only just seen this.Superb.I really must go and have a look.

You must, you can walk round it and touch the statues xx

Hopefully in the not too distant future.

I didnt know it had been there that long.But then I rarely go to that part of town

Saw your post on holidays, I loved the Amalfi coast, We did a trip where we went to Rome and did a private tour of the Vatican , breakfast in the Vatican at 7 and just six people and guide on a tour before it was open to the public. Then Naples, not to sure I liked Naples but we did a private tour of Pompeii and the lunch in a vin yard on the slopes of Mount Etna which was amazing. Then to Sorrento which we both loved would recommend it anytime. And then to Amalfi, sorry I am rambling again! 🙂xx

We used to go to Sorrento for several years-loved it.We also did the usual Pompeii Herculaneum etc. We only paid a brief visit to Naples but that was enough!

Private visit to the Vatican and breakfast- wow!

Verona is lovely. Although Im not too keen on the Romeo and Juliet tourist rubbish.

I saw Florence on the news today and it was so quiet. Shame we can't go. We've never been to Venice either which I regret but pre covid it was too busy- I dont cope well with crowds .Everybody getting in the way really annoys me!!

Very moving but it would break my heart to see it.

A Lovely Walk, in the local Country Park

by the time we had coffee at my Mum's. Looking over, as we past the Quarry, we could see the...

A lovely short walk with hubby

afternoon as the weather had improved, it had stopped raining, we had beautiful blue sky just...
•2 years ago
30 Replies

Walk today to Battersea park, while the Pilker baiters were taking the Micky out of me 😁😁

north side of the bridge and as you can se from the sign, the soldiers had to break step when...

A lovely walk with my youngest daughter