Fatigue while tapering: I'm currently at 6.5 with... - PMRGCAuk 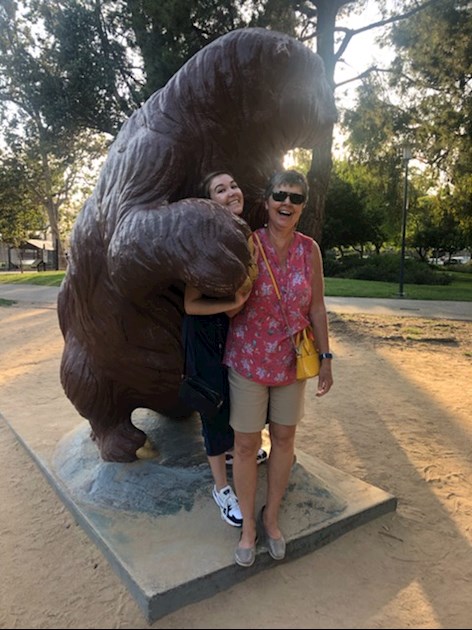 I'm currently at 6.5 with 4 days in a week on 6. I know I am in the midst of adrenal land, so what do I do about fatigue? I seem to bounce back after a few days. Do I repeat the previous week's taper to allow my body to catch up or plunge ahead. No PMR pain just annoying random aches here and there. Thanks friends.🌞 Here's a picture of me with my daughter having fun in Los Angelos. She thought I was much better since Xmas, and I was.

I do feel fatigued..I just push myself..I’m on 9mg..Same thing...little aches and pain...headache..once I became frightened at the headache and the rheumatologist bumped my dose up to 15mg and that pushed me back a couple of months...😢

You could try the slower taper and see if it helps. If it makes no difference I'd tend to keep on going with the taper provided actual PMR symptoms are controlled. It does get better over time.

I found it was just a matter of tapering as slow as you can - and hoping the adrenals will finally spark.

Not sure what tapering plan you are using, but just repeat the previous week’s doses - if you can.I’ve got an ultra slow one - if it gets really bad.

Really is just SLOWLY as you can until you get through this phase.

I thought you might be - but there are a couple of versions - just try the longest one - for a while, at least!

I was told to hang on at a particular dose until the fatigue, if bad, improved. 5mg is supposed to be a point where it is a good time to continue at that dose for even three months. I have had unbelievable fatigue, just moving my arms left me exhausted. I did not want to increase as I felt that I would have to go through the fatigue again. There was no PMR pain as such just horrendous fatigue. It does slowly improve though I found if I stick to the same dose.

Less of the plunge, more of the toe in the water. Good luck!

In all honesty I don't do much plunging anymore (implies quick action).

I'm one step behind you 7 to 6.5 and have never felt so exhausted. Wanted to go out yesterday, got as far as the front door (one flight of stairs) and had to turn back. A little better today but thinking of doing anything mildly energetic is exhausting. I think one just has to press on and if symptoms show slow down the taper even further until they disappear.

Trevgrrl in reply to maria40

I had the same experience this week. I went out to the car to go to the library, but by the time I made it down with the walker the two steps and then the path, and putting the walker in the car, I was gasping. I knew I couldn't make it, and had to rest before hiking back inside. So sad. What causes that. I have been trying to reduce. from30 to 25.5!

I have been at 6mg for a year. Don't see rheumy until Nov or Dec so staying here. I won't say I have energy, more than I don't get really fatigued so often. The first few months at 6mg I could barely lift my head some days. So I am going super slow.lovely photo.

I am down to 4.5mg , the last 3 weeks. Great fatigue, and last night had left leg cramp. I am going to ignore the cramp, hope it does not occur again to-night before increasing the dosage. In the mornings, I am up by 5:30, is the best time for me to be active, so I take advantage of that time and then take it easier in the afternoon. However, yesterday I had an errand that had to be done between 2-4, and I managed it OK. I'm trying not to have the idea of not being able "to do" set in my head. Perhaps, periodically dong something instead of thinking, "it's afternoon, I have to rest," is beneficial to me

My routine is down by half a mg every six weeks. It's worked so far, starting 5 years ago on 50mgs with GCA and then up and down as most of us have found. I've been on 6mgs for a week. Only issue is intense tiredness, irritability, lack of sleep. But I'll fight through it, rather than go up the ladder again. As to adrenals, don't know whether they've kicked in for good or bad

piglette in reply to Roy46

I have discovered trying to fight through the pain is a total waste of time, PMR always wins. If it is just tiredness that is different. I have had grinding fatigue. I was on 5mg and did not want to increase as I wanted my adrenals to get used to the fact they needed to do some work. My GP said I should go up to 10mg and everything improved dramatically, but I feel now I will have to go through that dreadful tiredness again.

It seems with fatigue we pay now or pay later. And I've appreciated losing some weird fat deposits on the the lower doses.

I never had the fat deposits. I was told giving up gluten and simple carbs on diagnosis would stop a moon face. So I did and it worked!

Have to get through the brick wall eventually, so I'll stick with sloooow reduction. One of our Harlow Meet Up Group is of the same mind. Every step backwards means two more forward needed.

...started on 6 mg last week.....took me 4days to get a new refrigerator moved in after my old one died, on Thursday. I was exhausted spent most of Friday and Saturday in bed. Sunday I realized I felt great! Monday, today, I feel great!....wonder if my Adrenals kicked in. Hope so....I even seem to walk better..?

Hi, I hit just the same problem at about 6.5 - I felt completely wiped out by any activity at all (had to sit and rest after just getting up and making my way to the bathroom, dressing was phase 2; I could sleep as soon as I sat down; and had to keep sitting down to avoid falling down!). I carried on with tapering, using Dorset Lady's dead slow method and reducing only 0.5mg each time, and just waited. That was last summer. I'm now on 3mg and feel much better - I think my energy increased gradually, starting around 5mg. I didn't think about stopping the tapering - would have been too depressing, and anyway there would still be that barrier to face at some future point.

I was lucky to have a supportive family & friends, and without them I would probably have spent almost all my time dozing in a chair. I know how extreme it can be and do hope you soon get through the barrier.

Pain in hips while tapering

extreme. Reduced to 4, I have been on this for 6 weeks, worse pain in hips, not sleeping well...

After 12 years of PMR and down to 5mg of prednisolone I am told I no longer have PMR! However I...

happened, but instead I have become incredibly fatigued - even more so than usual, which I thought...

Should I taper or wait a while

A question please, I have been tapering and now on 9.5mg preds and just started introducing...

Another flare while tapering. Please help re steroid dose

tried to taper three times, this is the fourth. Tapering on DSNS method to 11.5mg this week (I'm...

Don't get too relaxed about going out because you've had you...