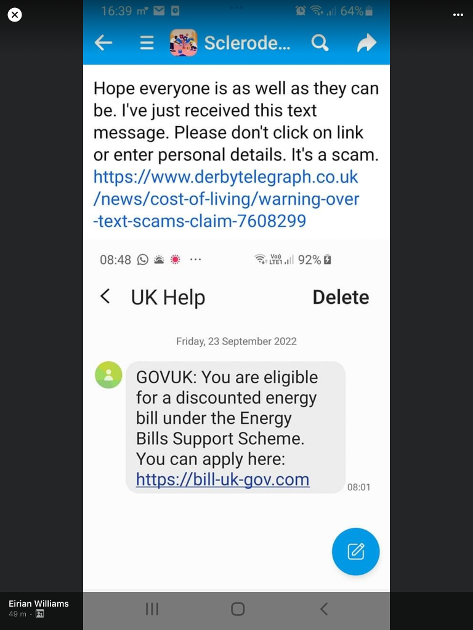 I've screen shot this from another group. My husband had this text a few days ago, it arrived in the early hours of the morning on the day when people on PIP would start getting the £150 energy payment (neither of us are claiming PIP). I knew straight away it was a scam with it saying it was from GOVUK: that's not how it's put. Two of my friends received it as well. With an estimated 6 million people receiving PIP who will be getting help I'm sure some will get caught out. Just be aware.

Paula-C
To view profiles and participate in discussions please or .
9 Replies
•
2 months ago

I appreciate you posting this. The police is also making people aware of this scam. I haven't received one yet but I never click on a link I don't recognise.

Thanks for the warning. The barstewards never give up do they, I hope they get well and truly caught!

Thanks for the warning. My husband and I get several texts or emails a week now which unfortunately are scams. It’s a very sad world.

Never, ever open a link you don't know. No-one genuine will ask you for your details or for money. Delete immediateky

I belong to a couple of RA Facebook groups and on one of them someone's posted about receiving a text. It looks like there is a genuine text being sent out, it's so difficult to know what's genuine or a scam theses days. Husband had a text yesterday telling him to book his autumn covid booster. Was it genuine, was it a scam? I told him not to open anything, I went on the nhs booking webpage and it did let me book it so it would of been genuine. Just got to be so careful now.

yes I had the same a few days ago . It’s sad that some try to scan us and take our money …

Just look at the IP address as it'll be weird and obviously not gov.uk

Apparently nobody has to claim, you will get it automatically in your account if on benefits etc and the £400 to all households will be taken off your electricity bill.

It’s so obviously a scam. Government web sites end in gov.uk, not gov.com

Unfortunately, if you Google the scam site it brings up legitimate government site: Google note and rectify!

Hi I am on benefits and retired early from work because of my ill health but is there any help...

this on here, but here goes. I was scammed last night with a text from my daughter I thought but...

Two days last week I answered the phone to be told ( after a few seconds delay ) of a male well...

Possible Scam via “Chat” or “PM”

I have received a message via Chat from a member “suesuool52”, which involved prayers, conscience, a
•4 years ago
14 Replies

OFF TOPIC: 12 DAYS OF CHRISTMAS DAY 5

OFF TOPIC: 12 DAYS OF CHRISTMAS DAY 4