Long miscarriage symptoms what should I do?: Hi there... - NCT 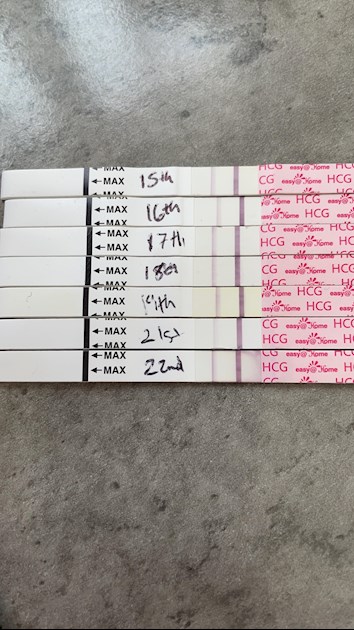 Sorry if this is triggering but I hate wasting doctors time so I’m wondering what to do.

3 weeks ago at 4 weeks pregnant (just got positive test) I started bleeding, couldn’t have a scan as too early doc diagnosed miscarriage/chemical preg. Sent me home, said I’ll have a period/bleed and I’ll get negative tests almost right away as so early.

Bleeding stopped for a week then started again, not as heavy as my period. Some tiny clots. Bled for 5 days. I usually bleed for 8 days, very heavy.

Now I’m 2 weeks and 5 days post initial bleed, still getting positives but they aren’t strong positives, but defo strong. I called doc back last week and they said I should start to see negative tests.

Last few days I’ve been having cramping and sharp pains on my left side, with spotting. I’m also exhausted drained and covered in zits. I’m convinced I’ve lost the baby and my miscarriage isn’t finished. My husband wants me to go a and e incase of infection but I hate wasting doctors time especially given certain circumstances.

Should I ride it out as the GP has said? Or given my cramping and spotting go to a and E? As it was such an early loss I’m confused why my tests are still pos. (attached photo, dates are March 2021. First positive was end of feb just bleeding started wed 3rd March)

Sorry to hear this. I would call EPU at hospital to arrange scan so you know for definite what is going on, especially if you have pains. I had a miscarriage much further along which resulted in retained tissue which meant I had to go back for repeat scans as your body still thinks your pregnant until all the tissue has gone

Thebswanttobe3 in reply to ADC2019

Thank you for replying, and I’m sorry to hear about your MC

it really sucks. I’ve just now got of the phone with my doc. They’ve said I’ll get a call today. They keep telling me I can’t have a scan because of COVID but as it’s been 3 weeks now I’m hoping they will.

ADC2019 in reply to Thebswanttobe3

Im sure I've seen lots of people getting scans in the last year on this forum. I would cut out GP and just call EPU yourself if you don't get a call, just google your local hospital and early pregnancy unit. They are usually very quick at getting you in for scan if its needed they will be best people to advise you. I know you don't want to waste doctors time but this is what EPU are there for and if you have had a MC 3 weeks ago and are still testing positive it might be they need to give you medication or something to complete it. Either way you need to know

Agreed - going to A and E is wasting resources and time, ringing EPU exactly what it’s there for.

I’m so sorry to hear this and I agree with ADC - ring your local EPU and explain exactly what you’ve just written as I think a scan would be sensible considering the pain you are having. Xx

I had to wait several weeks after my miscarriage until I did another pregnancy test, from what I remember it was after the bleeding stopped and then test after 3 weeks, but I did have surgical management as it was only picked up at my 12 week scan that I'd miscarried. So the bleeding didn't last very long and my pregnancy test was negative at that 3 week point. I think the advice is to go to A&E if you're bleeding heavily or you have a temperature or signs of infection. It might be a wasted trip if you go and they give you the same advice as your GP, I wouldn't class it as an emergency unless you're showing signs of fever or sepsis in which case you should go to A&E as soon as you can.

Could you speak to your GP again about your pain and your concerns that your miscarriage is incomplete and ask for a scan at your nearest early pregnancy unit? That's what I would push for especially if you're still getting pains and cramps.

Good luck, hope you get some answers soon xx

Thanks all and I’m so sorry to hear about everyone’s experiences! I called the GP, went in to be seen, and they sent me straight to hospital. They’ve not been very helpful at all I’m really emotional about it. They won’t scan me even though I’d be 7 weeks (if it was a viable pregnancy) but I’m waiting on bloods as they did a preg test and it was positive. They’ve said if my HCG levels are good back in tomorrow for a scan. But if they’re not bloods again in 48 hours to see how the miscarriage is progressing. I’m so confused and annoyed I called the GP and they sent me to hospital for a scan and all I’ve had is a full STI screening and a cervix prod. I asked questions about what my cervix is like etc and they won’t tell me

Orla9298 in reply to Thebswanttobe3

Good luck with your bloods and next step, I hope you get scanned. I would assume they will check for an ectopic of Hcg is high enough to see anything, just to be sure x

Definitely contact your early pregnancy unit, I was convinced I’d had a chemical pregnancy. I used clear blue pregnancy tests, I was getting 2-3 weeks, I then started bleeding but the test progressed to 3+ weeks, but then went back to 2-3 weeks for a few days, then back to 3+ weeks. The bleeding was happening on and off within this time. I was 100% sure it was a chemical pregnancy, and the midwife I spoke with at the EPU though so too. I went for a scan at 6 weeks and was totally shocked when they seen a heartbeat - I now have a lovely 5 month old - good luck I hope it’s the same for you x

I'm 10.2 weeks and last night I wen to the bathroom, I have been very constipated so was trying to...

Did I have a miscarriage?

I started birth control early October and recently the past week or so I’ve had light...

I had a miscarriage due to a car accident, how long do I need to wait before getting pregnant again?

my baby, up until a couple days ago when I started bleeding and cramping really bad so I went to the

Positive pregnancy test 4 days ago been bleeding for 3 days but test still positive can’t get a...

Should I be over my miscarriage?

and when I’m around certain people. With the right people who understand me I feel ok. I’m scared to

Anyone conceive after getting Covid'19 vaccination? Help!

Is there a line?