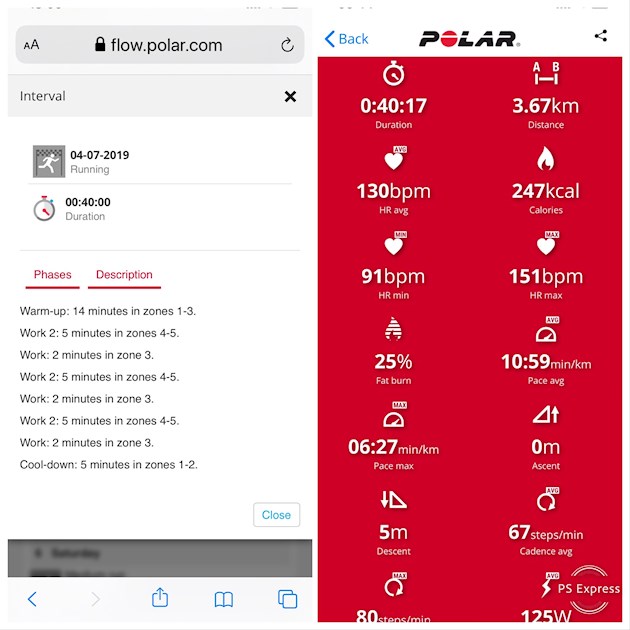 Intervals today. I had to haul myself out of bed after only five hours sleep to get this done, as the Virgin man is coming between 8&12 to fix my broadband.

Beautiful sunny morning but chilly. This was hard because my heart rate kept going too high on the lower zones. I’ve been running at maximum heart rate a lot of the time for the last nearly two years. Eek! I began to get the hang of slowing down towards the end of the higher heart rate bits to get my heart beating slower for the lower bits - if you see what I mean. But the last five minute cool down was all in zone 3 instead of 1&2. I’m trusting this will get easier as my fitness improves.

Today’s plan on the left and my results on the right.

Well done Flick. I'm not sure intervals will get easier as such - because you should always be pushing yourself - but you will become better at doing them.

Thank you. It wasn’t hard as in pushing but I’m having to hold back to keep my heart rate within the correct zone. I didn’t break sweat once because I was running so slowly. So strained knees but not tired. I hope I can run faster in the same zone once my fitness increases 🏃‍♀️😊

I have never run to heart rates myself personally, but I imagine that it takes a deal of faffage to get it correct.

It’s supposed to increase fitness so watch this space. But to begin with you are running so slowly. As you get fitter and your heart rate comes down, you can run faster in the lower zones

Oh as to the faffage , the plan uploads to your watch, which then both shows and beeps if you aren’t sticking to the zone for that phase

Thanks Flick, I meant getting the right pace to match your heart rate, when your heart rate will be constantly changing throughout the run, not to mention added effects of hills etc, must result in a lot of faffage to control your heart rate.

I shan’t know till I’ve done a few I think. I’m constantly a couple of beats out of the zone, so I’ve done a different calculation that takes it up two beats. It isn’t too bad as regards fine tuning as most if the time you have two zones to stay in, and when it’s only one it’s quite broad, so hopefully my body will get fitter and it will be easier

Good report from you Flick, just watch that heartbeat doesn't go too high, talking about Virgin, I go to my walking club every Thursday morning, today I'll have to cut the walk a little shorter than usual as the Virgin man is coming to fix my Landline phone so I will be in when he comes, I can receive calls but there is no dialling tone, so I cannot make calls.

It’s good having the training plan in the zones as it’s making me stick within them. I do wonder if my heart rate is naturally high for my age as I have no difficulty holding a conversation in zones 4/5 a lot of the time. My resting rate goes down into the 40s sometimes - but ecg always shows my heart is really strong.

I have no dial tone either, pixellated tv and intermittent internet. As it happened suddenly, I think it’s probably them not my setup

Just hope that it can be fixed quickly.

Aaagh ... my time slot came and went - no engineer. Starving but didn’t want to be preparing food when he arrived (too many furry thieves around). Phoned virgin, it’s a fault I’m my area and all working again and they sent me a text to tell me. Erm... no .. or if they did, it’s lost in telephone space. I THOUGHT it must have been a fault their end! So, while assuring the nice Indian lady that I wasn’t blaming her, I let her know I was pretty frustrated, she said it was ok, they get frustrated customers all the time and she would say puja for me at the temple later- so that’s alright then.

Lol Flick, I got my walk today at my walking club, the walk was not shortened as one of the members ran me home in his car, now waiting for the man to come and fix my landline phone, the last two times I have phoned Virgin for a fault, it's been for the Internet and believe it or not I phoned back saying that the fault had fixed itself and there was no need to come, however, this time it is the phone and that has not fixed itself, so here I am into the second hour waiting for the engineer to come.

Good luck. If he doesn't arrive, just phone support and you might get lucky and have puja said for you - which, joking aside, i think was really caring of her

I have found the agents, now called agents, they used to be called call centre operators very helpful with Virgin, I will have to wait until after 4 o'clock to phone them if the engineer has not come by then, I will let you know what happens. 😊

I did get a reminder text from Virgin when I was out this morning reminding me that they would be coming sometime between 12 noon and 4pm.

I got a text yesterday saying they would be coming today, but not a cancellation one. Maybe it's Vodafone's fault and it will arrive later. Good luck. Yes, i really like the Indian call centre, they are always polite, friendly and send some sort of blessing

Update Flick, phone fixed, the nice man from Virgin Media came to my door at 5 past 3pm, told me that the fault in my phone was caused by water getting into a "pit" outside my home, not the phone connection in my house, so that's great, have a great day. 😊

That sounds rather mystical. Does the phone work now?

Yes, it's working fine, the man from Virgin told me that water 💦 got into the phone line outside, I think the word he used was 'pit' probably a technical word for water damage in the phone line, everything is now working fine. 😊

Tomorrow morning I am going to run a 5K in the same park and exact route that I intend to run my first parkrun a week on Saturday. 😊 🏃

Have a great run x

🤣🤣 oh wow this makes me laugh and feel frustrated for you all at the same time! I can run in zone 4 and talk too, I saw it as a positive! X

It is positive- but it’s frustrating to run slowly to keep heart rate down. I ran 90% of the Blenheim 10k race in the red zone and still chatted to people xx

Oh it is hugely frustrating! I find zone 2 sooo hard, especially if I go up a slight incline! I refuse to walk now though so I just run very slow! X

I do the same, just run very slowly. It’s knackering my knees! X

Go Flick. I am seriously impressed!

your heart rate up☹️ Gah! More tiring now I’ve lowered the zones too as I’m having to run slower to...

This is the Polar HM training plan I chose. It’s heart rate based and adapts to my fitness level as...

along to get my heart back under control! How vain am I!

I’ve got the hang of this heart rate...

Are you training for a HM? join the latest HU HM posse here ...