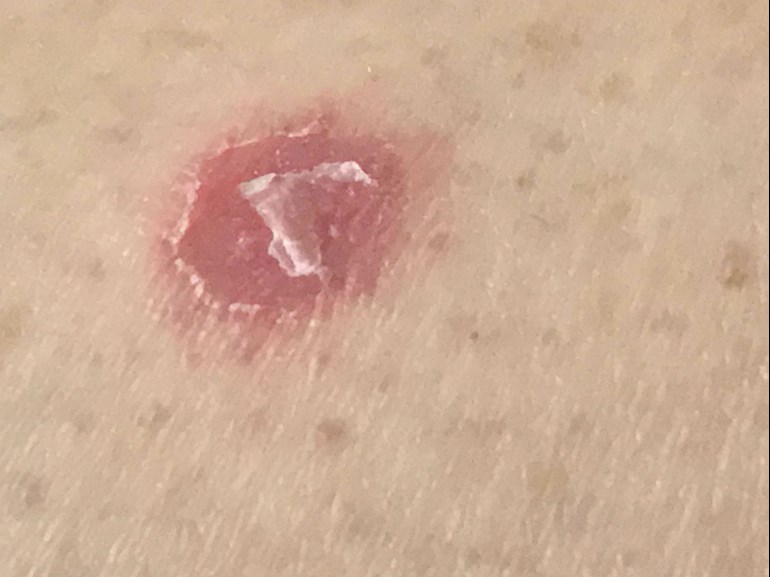 Red rashes and spots on tops of hands and all over legs, anyone else I've not been diagnosed with Lupus but am running out of ideas?

Started early this year with one round mark size of fingertip on top half of leg but took no notice. Then I noticed a red rash raised slightly on top of my hand, stinging nettle type.

I was given cream and steroid cream over the phone appointment. Nothing and now I've got red spots dotted here and there over my legs, biggest is fingertip one than they vary to tiny dots to a mass of spots in various areas.

I got one or two itch a bit but nothing much and has not done so for weeks but the spots are growing in numbers.

I used to have very spotty thighs although they were more raised like actual spots than dry patches. At some point this year they went away (and I’d had them for a few years), so I think it might have been to do with lupus cause I started taking hydroxychloroquine in Jan. not 100% sure though, could be coincidence.

I have had exactly that for several months and now beginning to ease off a little. Just like big chicken pox spots that turn into what you have photographed. I must stress not as many as you describe, I have only had two or three at a time, they take ages to go. the only thing that has worked is Dermovate a steroid ointment from the Doctor, all the other ointments and creams they prescribed didn't touch it. You have to speak to your doc' again.

This looks similar to my spots I had all over my legs , arm's and body when i first went to my skin clinic. Within 2 weeks after I had a biopsy taken I was told it was Lupus. My face spots were swollen, hot and angry. So itchy too. Since I was put on malaria tablets (which I still take daily) my spots are mild. The spots are my seemingly the only signs I have of the disease... so far. Good luck

this is what I don't understand, its not itchy

I get these frequently and I was not diagnosed with lupus but allergies and sensitivities, although my GP said he could not rule out lupus, but was reluctant to state that I had it. I had lots of strange blood test results, but he said allergies can cause those, too.

arnieatmo in reply to Cann

yea that's why I'm not going to doctors, will mention it next time unless it spreads to my face!

I get rash on tops of my arms and on my upper back. It was really bad 3 years ago and nothing cleared it , had it for a year before my gp took a biopsy and it confirmed lupus. The hydroxychloroquine cleared it up quickly. However it's flaring up just now again .

arnieatmo in reply to Caramia1964

They won't say if I've even been tested for Lupus

I can understand why you would be concerned about these rashes, particularly because they aren’t going away and are increasing in number. If the dermatologist thinks there is a possibility of it being skin lupus, I think they will do a biopsy. Are you still unable to have in-person appointments?

Good luck with this.

arnieatmo in reply to KayHimm

yes I've written to my GP requesting I referral

I have similar spots, mostly on my upper arms but also in a few other areas since the start of this year. I was diagnosed with lupus this year. The dermatologist said it could be due to psoriasis or lupus. A few have went away but a bunch are still lingering and are just barely starting to improve.

arnieatmo in reply to nellie_4132

I spoke to my dr about petechiae and purpura (spots under the skin) on my arms they don't hurt or itch. He sent me for bloods and I am ANA weak positive and vitamin b9 and d deficient. I really don't understand it all.

The ANA is one of the tests for systemic lupus. They wouldn’t do that test unless your skin biopsy was positive for lupus or if you had symptoms like fever, joint pain, fatigue.

Used to get this all the time as a child. Was told I had eczema at the time but probably just mild childhood lupus. They’d turn white after they healed. I was the human equivalent of a Dalmatian for some time. Steroid cream helped with the redness but not really the lesion itself.

My best suggestion is have a dermatologist biopsy one if you can. Sometimes lupus can be diagnosed this way. Hope this helps and you find answers soon. ❤️

I'm going to request seeing a dermatologist, thank you

Yes, I’ve got the same. Have been diagnosed with lupus nephritis but my skin has flared up over the weeks.

This looks like a typical lupus red rash particularly cutaneous lupus (DLE). I’ve got loads all over both hands and arms. Very distressing because the creams don’t seem to be working: Protopic, Betamethasone, Clobetasol propionate...at least not for me.

Perhaps a combination of topical steroids plus immunomodulators eg Protopic?

My consultant says that if the creams, lotions etc are not working then systemic dosages (tablet medication) need to be adjusted.

This shows how unsatisfactory phone consultations are!

Dermatologist should actually see this lesion.

The white edges and central bit are white, flaky dead skin probably flaking off easily. Could also be psoriasis which also gives one silvery, white peeling flaky skin ++😫Difficult to say whether it’s primary psoriasis because a side effect of MMF can exacerbate psoriasis.

arnieatmo in reply to Newby12

I think it's only that one mark with white stuff on it, that was my first. I've got others like it to, all on my legs, all different sizes, some singled out and some in groups varying in size, and a lot now like patches of my pores are tiny red dot. I have a few on the body, not many as lots of tattoos hide anything but on the top of left hand is the part that looks like raised stinging nettle rash about 4", you can see it under the black ink. Other marks on my hands are mostly just flat and red. I noticed last night that I had several small red dots in one area alongside left ear 😲

Thanks for response. The white “stuff” looks like flaky dead skin. Once I start scratching mine they get itchy.

I keep my skin very clean by washing frequently. That lesion could get infected.

Put healing, antiseptic cream on it. You don’t want germs invading that area.

Just wondering whether the tattoo black ink is triggering some kind of immune response in your body? Skin ink can be dodgy? Check out the ingredients.

My rash has progressively gotten worse and a new development seems to be super tiny red dots to...

not to scratch the itchy spots/rash.

Has anyone had these spots or rash? I have not been out in...

pink, hot rash can be the lupus butterfly rash over cheeks & nose , or are they always red? Could it

just go for it. But I've procrastinated every day.

Now I've got tiny red spots, not raised at all,...

Anyone know if this rash is lupus or not?

ever day. I have it all over the backs of my hands and I have a few lumps on my legs and feet

For all of you who are struggling ❤️❤️❤️

How often do you see your rheumatologist?