Help with biopsy results please!: Hi everyone, was... - LUPUS UK 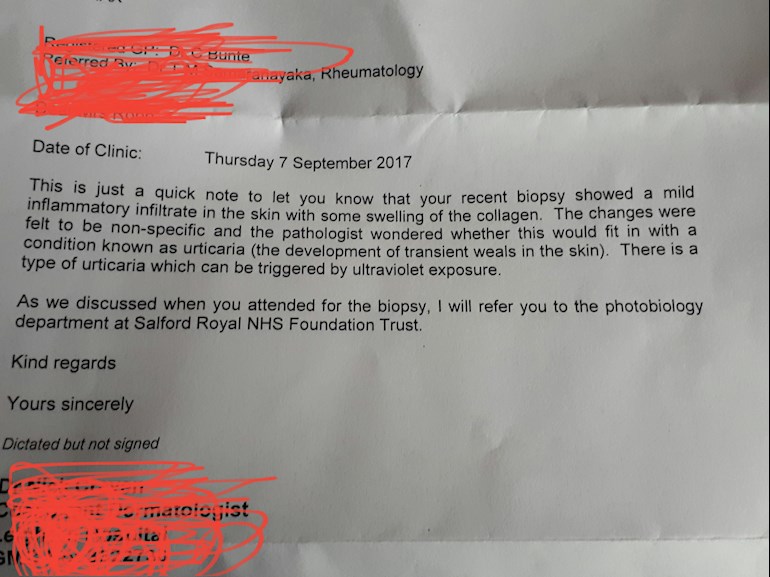 Hi everyone, was wondering if anyone could relate to my skin biopsy results?

Had ongoing issues for years with painful joints (which recently an MRI has confirmed that I have something inflammatory going on), Raynaud's, splinter hemhorrage's in nails, new allergy to penicillin and terrible sun sensitivity. I've also had one positive lupus anticoagulant test two years ago but everything else normal. Been on hydroxychloroquine for two years. I'm at the end of my rope!

Comeonpeeps
To view profiles and participate in discussions please or .
Read more about...
13 Replies
•

Urticaria just means hives. The person looking at your biopsy seems to be saying the changes he is seeing--inflammation--may be caused by hives, although it isn't certain. Also, hives can be caused by sun or light. You are being referred to specialized department.

I was told long ago that my hives could be lupus related.

Unfortunately, your results are not very definitive because many things can cause hives, including anxiety.

I had a biopsy that wasn't all that helpful in the diagnosis. Then I was told it was diagnostic for lupus. Most recently I was told that kind of biopsy wasn't being used anymore!

Thanks for the reply Ann. Yes I agree, it does sound inconclusive. The thing is the reaction I had which he biopsied doesn't look like hives and I react to the sun in other ways too, it makes me very unwell. I only get these spots when I've been in the sun, must be caused by the sun.

I thought having a biopsy was definitive of whatever was going on, seems like that's not the case sometimes.

What did your biopsy say, and how long after were you diagnosed?

Also collagen in the skin is part of the connective tissue it seems and my MRI shows damage to the connective tissue in my wrist (had one wrist done, but I have the exact same problem in the other) so it feels like there's a connection forming here? I suffer with other joints, ligaments too which haven't been MRI'd.

Been from one specialist to the other...can't see it ever ending!

It was actually part of the tests I had to be diagnosed and that was 7 years after being sick. (I got sick in 1977.) The biopsies were part of a lupus band test which looks for immune markers in sun exposed skin and skin not exposed to sun. The sun exposed is supposed to be positive. At the time the non-exposed skin was supposed to be negative. My came out reversed. Most recently, I was told they were not very interested in the test anymore.

The lupus anticoagulant test isn't actually for lupus. It's for another autoimmune disease which is not uncommon in lupus called antiphospholipid syndrome.

For me it has been symptoms that have arisen of time, plus my improving on lupus meds that have been more putting me in the lupus-like UCTD category. I also have been diagnosed with APS and Sjogrens.

Some of the rashes I get in the sun might look more like hives if they were biopsied, I expect.

Hi thanks again for the reply.

I'm aware the lupus anti coagulant is the test for APS. I think the rheumy suspected that as well. I'm on daily aspirin too. And I've been keeping track of symptoms and reporting as well as showing pictures for some time.

The hydroxy helped tremendously. I was told to come off it recently in preperation for my biopsy, (was off it for 2 weeks) and about 3 weeks later I had a terrible flare.

So what did your biopsy show exactly, antibodies?

Here's a little info on the test:

Maybe because my lupus band test wasn't positive it means I don't have lupus.

At the same time the dermatologist took another biopsy from a rash area which was totally different. I think your doctor took that kind of biopsy.

My LBT results discussed both areas, (sun exposed...) and immunoflorescense.

Sorry if I confused you. But all these tests can be mind-boggling.

I'm not a doctor or dermatologist--just a science-geeky patient that likes to understand my tests.

Even though all three of these biopsies were considered negative then, it didn't prove whether or not I had lupus. Since my symptoms still suggested lupus, they put me on plaquenil. I improved greatly on that, and that helped me toward a diagnosis.

Your doctors will have to figure out what is going on taking all the evidence into account.

Glad you're on the road to recovery!

Sorry I should have said, he took two biopsies, one was immunoflorescense and the other histology.

So is that a lupus band test?

He seems to only be talking about one biopsy, and the results look to be histology. immunoflorescense isn't mentioned here.

Wether or not the immunoflorescense test is exactly the same as the lupus band test, I don't know. Sounds like they maybe similar.

In the US results come in in different times. I'm afraid your doctors will have to tell you. But you have good questions here to be asking.

OK well thank you for all your comments, much appreciated. It's good to get opinions from someone a bit more knowledgeable.

I've got lots of questions, I'm waiting for the dermo to get back to me.

Do you know much about photobiology?

I've had a look, and the impression I get is that they are the same thing.

The dermo finally called me back today. He said the tests were inconclusive, and that they don't tell him much but where there are infiltrate cells, there are a few more than there should be and it's difficult to rule out lupus.

test results Negative cardiolipin and B2GPI ,but positive Ro and Ro52 Searching the internet for...

Can anyone help please

please this is a long story. So for the past 2 years I've had the following symptoms which flare...

again about 2 years later. Then after having hairloss for 2 years, it stopped. Now, I'm...

dose but when mentioned to my lupus doc he said noooo it will flare your lupus up.I saw my doctor...

help me :) I am currently undergoing tests for lupus and are yet to attend my firm rheumatologist...

Update and how do you cope being sociable?

Not sure if this is the right place

Newly diagnosed with Lupus and aching again now - what next?