Well thought id let you know whats happening now as you have been threw most off my journey. My husband has gone down hill a bit he hasnt eaten in 5 days anything at all and barely drinks .he finds it hard even to get out off bed they have gave us a comode and walking frame to help him he had a absence seizure (they think)on tuesday everning very scary he wanted to go to the loo i helped him up he did about 3 steps then he went really stiff and he just stared didnt blink then within a minute or two he just colapsed lucky enough my son was there and we got hin back on the bed were he went to sleep .they have given him medication for this .he now sleeps at least 20 if not more hours aday, its an efort for him to speak ,we are having a nurse come in from today to wash him ,as im finding it hard as his a dead weight to move .im not shore what happens next as our palitive nurse said to try and get him to take sips off water as much as i can ,which i am doing but its hard .and she said to try to get him to eat little bits but if he doesnt you cant force him, i have tried really small dinners off all his favourites .rice pudding custard jelly all soft stuff scrambled eggs . but he wont have any off it has anyone else on here had this happening to them any ideas on what to do next .he looks so ill now im scared were coming to the end off our journey but nobodys saying that .they said when they first found the brain mets there wasnt anything more they could do apart from palitive radiation which he had and the doctor said had under a year .but its only been 3 and a bit months . I dont know what to think whats going to happen next should i be preparing my children and granchildren .or will he pick up again .i just dont know i think that is the thing thats scaring me most the not knowing x 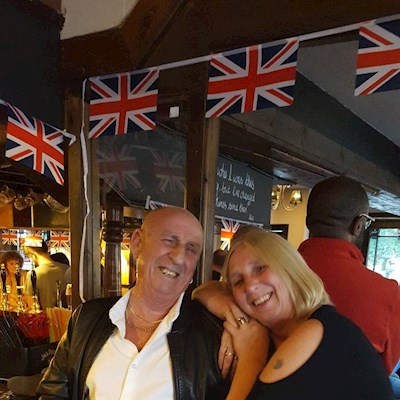 miasam
To view profiles and participate in discussions please or .
10 Replies
•

Hey Miasam, so sorry to hear how thing are for you, it must be so tough and scary!!

You seem very lost at the moment which is understandable! My advise would be to talk to someone, I find doctors don't give away too much and don't tend to commit to too much but ask the questions you want answered. If the not knowing makes it worse.

You mentioned your hubby had radiation to the brain mets? Could it be a reaction to this? I know symptoms can worsen before they get better.

Reach out for help, the Roy castle lung foundation have a help line, try them!!! Being alone with scary stuff and thoughts is awful!!

Thanks for replying its very difficult he had the radiation the beginning off august so i dont think its that They have come in now to wash him and he has exsepted that i didnt think he would .so thats made it abit easier for me as he didnt want me to do it .im going to ask the palitive nurse when she comes whats going to hapen i have 3 children and 5 grandchildren 2 off them are 18 and 20 so want too know i need to prepare them .so hopefully she will be able to tell me something. At the moment he has no quality off life his not eating barley drinking has to be washed and sleeps all the time any way thanks for listening to me carol x

Hey Carol, it's the toughest of times and I just know there is nothing I can say. Affects from radiation can last a few months so it's worth asking, people can just pick up. I'm guessing no-one has mentioned hospice to you? Oh Carol, this is so hard, I hope you have someone to support you!! Lots of love ur way xxxx

Thanks we me and my husband has talked this is some time back as with the brain mets he gets very confused now. that he doesnt want hospital or hospice he wants to stay in his home and im happy for this to happen he spent 3 half months in hospital last year .and he said never again.but its not easy seeing him like this . Carolx

So sorry to hear about your Husbands condition. There are a few things you may wish to consider here from what you have said:

The medication that he has been given for the 'absence seizure' may be causing some side effects of drowsiness and lethargy, perhaps discuss this with the Nurse/GP .

It is understandable how this is such a frightening time for you all, and it may help to know what to expect next; do discuss your concerns with the palliative care nurse , and although no one can give anyone an exact time, they may be able to indicate if the change in your husbands health is to be expected and perhaps be able to guide you in your family situation.

Perhaps sipping a bit of ice (or even flavored ice cubes) if your husband is unable to drink fluids, or rubbing his lips with the ice and applying Vaseline/lip balm.

Ensure you have plenty of support, both physical and emotional, it must be very tiring and draining for you.

Thinking of you all

Thanks for your reply am going to speak to the palitive nurse when she comes i know she can only give me some guide on whats to come but at least that will help .i have been keeping his lips moist as best i can and im giving him little sips off drink tea coffee made with milk and suger water orenge anything i can get him to have but its only ever a cupple off mouthful then he doesnt want any more he hasnt eaten anything now at all in over a week .he just says ill have it later when i take it in to him but he never does ive been trying him with things like rice custard scrambled egg all soft stuff but he just pushs it away .thanks again for your understanding carol

Hi. I went threw all this scenario with my partner he stopped eating but was drinking a little this went on for 8 days with no food then the macmillan nurse. Called in and out of the bluetold us both he was coming to the end ov his life we were mortified at this because. Wr belive evryone should have hope. Until there last breath wr did not want to heer this in our oen minds we new but nevet spoke about it from that day on he stopped drinking. As well has eating he wasn't. Sleeping for feer of the unknown but sadly he deteriorated evry day aftet that and passed 10 days later peacefully at home surrounded by his family but hopefully not evryones The same and i hope all goes well. For you xx

Hello you made me cry reading this but your the one person who has helped an been honest .my husband hasnt eaten one thing in the last 8 days and he drinks small amounts maybe it adds up to a cup off liquid in a day with sips off coffee and water he sleeps maybe 21 maybe more a day he doesnt get up only to go a wee with my help not that he does that much .he cannot even wash his self anymore the carer comes in and does it he has lost so much weight .the palitive nurse is coming in on Thursday she said to assess him again .i just wish they would be honest with me i need to prepare my children and granchildren they know he isnt well and the elder grandkids know he doesnt look good but dont want to say he might be coming to his endof journey in case he picks up so dont want to worry them unless i have to .its hard to do whats best .was your husband in pain at all mine isnt he just hurts when you move him he says his bones hurt i think were he is so thin thank you for being so honest carol xx

Dismal in reply to miasam

Sorry I haven't replied before. That must be very hard for you. I hope you get all the support you need and take care of yourself. M

miasam in reply to Dismal

Thanks his detiriated a lot now .its very sad to watch him .how is your husband doing carol x

a hospital bed at home to make it easyier for him and more comfortable. The palitive nurse and the...

ive lost my right arm .and god knows how im going to live without him .but at least his pain-free...

his had them not shore what happens next apart from they are going to wean him off the steroids....

see oncologist yesterday .they said he has 4 mets 1 at the front off head 3 to the back .the only...

times had lots off help and advice from you all my husband has had the 5 treatments off pallitive...

Two and a half weeks post upper right lobectomy.

Will my left leg ever work again