Hello Friends, It has been a while since I posted. I was originally diagnosed 7 1/2 months ago with stage 4 Non-Small Cell EGFR + Lung Cancer. Had a great response to Tagrisso 80mg as my first line but progressed only after 6 months. My biopsy in July confirmed that my Non-Small Cell has transformed to Small Cell Lung Cancer. Just completed my first cycle of Chemo with Carboplatin+ Etopaside. Unfortunately there are not any or very limited treatment options for Small Cell as compared to Non-Small Cell. Will be nice to hear from and may be connect with others in the same situation. My prayers and hope for all of us fighting this monster of a disease. Hugs Basha 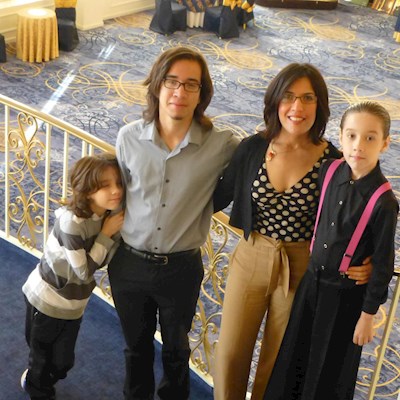 Bfowler
To view profiles and participate in discussions please or .
Read more about...
15 Replies
•

My mum has this and after just two round of same chemo as you had responded really well!!!

I was so surprised and happy. Try and stay positive, it’s so hard and my mum had a bad day the other day, when it was just too overwhelming. Will be thinking of you xx

Thanks so much for sharing your mom's story. This indeed gives me hope. Hugs Basha

Hi Bflower, my father had small cell lung cancer and I found a clinical trial for him. It was double blind study’s - the study consisted of 2 immunotherapy drugs, 1 immunotherapy drug or nothing. We think he got both drugs because he got a extreme rash. He also had Chemo as well. He ended up having all the cancer in his body disappear though it was the brain radiation that didn’t work for him and had a stroke and eventually he died. I didn’t want him to get the radiation he was 80 years old. I think the 2 immunotherapy was opidivo and yervoy.

I am so sorry for your loss. Did you mean the radiation didn't treat his brain metastasis at all? was it a Whole Brain Radiation? or did he have an adverse event to the radiation?

Thank you 🙏🏼. He has WBRT and a stroke 5 months after his treatment. After treatment he was having major cognitive issues and the stroke got him in 3 parts of his brain. He was similar to a dementia patient though hardly could speak. It was a difficult sad time. He was like this for about 14 months before his death. He had to be taking care of 24 -7. Sending you much healing and prayers. I believe there are treatments - you can fight this. Have you gone on the clinical trail site to see if there are any in your area?

This is what I am going to do next as I fight my insurance and look for rides to my treatments. It is pure hell!. I will be asking my doctor at MSK to put me on the list for clinical trials.

So sorry to hear this I had stage3 lympnodes non small Cell had upper left lobectomy. Turned down radiation felt too weak. Did 6 months chemo. Carblatin Taxetere and 3 months of abraxan. I am 6 and a half year survivor. I tell everyone to not give up to keep fighting. There's hope I thought I wasn't going to make it but I did and so can you. Even though yours changed. Keep fighting and hoping. Were all here for you. Love susiejo1948

Hi Susiejo, it is so wonderful to see your encouraging message. I am so lucky to have connected with this group. This is so comforting. I wish there is a way for those of us in US or here in Northeast to be able to meet each other. Love and Hugs to to you and the rest of our fellow lung cancer warriors!. Basha

I'm sorry to hear of the additional diagnosis.

I have a family member in your situation. He was diagnosed a few years back with NSCLC-ALK; Stage IV. It hasn't been easy on him, but overall he has done remarkably well. Treatment has been effective and he has been able for the most part to resume all his normal "pre-cancer" activities.

In December a new "spot" was identified in a routine scan and after biopsy it was determined to be SCLC. We had no idea this was even a possibility, so it was a huge punch in the gut.

But, he is doing really great currently. He had chemo (same combo as you) for the SCLC and responded well. (Did experience hearing loss from the platinum chemo.) If you met him you would never know he is fighting this battle. His doctors monitor him closely, of course, but at this point, things look good. So, know you're not alone and there are others out there who are successfully fighting the same fight. There is reason to be hopeful.

Good luck in your journey...sending good thoughts your way,

Thank! Julie for sharing this story. Feel free to PM me as I would love to know more about his treatment, hospital, oncologist and others for my awareness and learning. I am being treated at MSK NY.

Hi Julie, Thanks again for taking the time to share this story. It is such a hopeful news. When did your family member learned that his cancer had transformed into SCLC? Where is he treated? has he completed all his cycle , how long has it been since he completed his last Cycle of Chemo. What level was his response to chemo? Any rediation to the chest and or brain? I am really interested to know more. I you are Ok, feel free to PM me and I will give you my contact information. Hugs Basha

13 years ago I was diagnosed with stage 1b small cell.. had a lobectomy followed by 4 rounds of cisplatin chemo..i am now cancer free, feel wonderful and have lived to see my granddaughter celebrate her 12 th birthday.. good luck to you and keep te faith

I am so grateful for you and your message! Hugs! Basha

I’m a little late to this post but wanted to ask a question. Are you in the US? I wasn’t sure as a lot of the members are in the UK. I’m asking because I saw that you said you were looking for rides to treatment and I wanted to let you know if you didn’t already...that the American Cancer Society has a program called Road to Recovery program helps with rides to and from treatment. I volunteered to drive for a full year and it was super rewarding to help other patients get to treatment. Something to think about if you haven’t already solved that problem. Be well! 😊😂😂

I just wanted to add that there is a newly created Facebook group “NSCLC with SCLC Transformation” for people going through the same thing as you.

Good luck and I hope everything turns out ok.

treatment is typically the same as for small cell lung cancer (SCLC). She is currently receiving 4...

anxiety/depression but I also have stage 4 non small cell lung cancer. I just had my 2nd treatment...

Durvalumab not working, based on Guardant 360 Tumor Response...