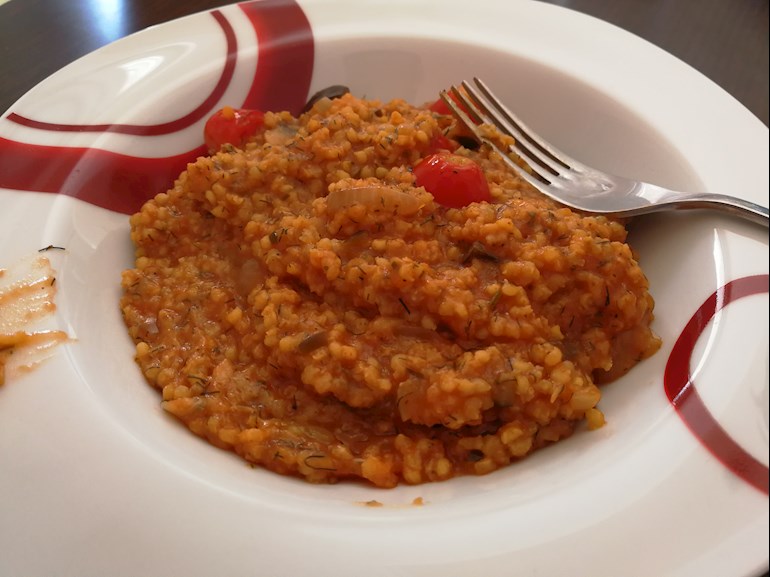 The image attached is actually a risotto dishes I made using millet, but I seem to have trouble eating a lot of millet as it facts poorly with my recent gallbladder removal and digestive pains for some reason.

I'm mostly on a vegan whole food diet so I use a lot of grains and seeds as staples. Rice is a long time favorite of mine but I've recently done research on the arsenic content in it, and most authorities agree it's not actually something we should ignore or take lightly. Arsenic in rice is a real concern. I've been using brown rice because it's obviously a lot healthier but it is said to contain up to 80% more arsenic than white rice. So it's a trade off. You can either consume brown rice for all it's health benefits and ingest a lot of arsenic in the meantime, or you can switch to white rice and risk high blood sugar, empty calorie overload, heart disease, diabetes etc. So there's no winning with rice. Should we all just agree that rice is generally an unhealthy choice and limit it to a few small servings per week at the most? Would that be justified?

I've been using other grains and seeds like quinoa and buckwheat instead which are great, but I still prefer rice from time time because it tastes a lot better and is more satiating. I wish I could eat my brown rice in peace

DMP1391
To view profiles and participate in discussions please or .
Read more about...
12 Replies
•

I'll tell you how then, brown rice!

Hi in addition cooking the rice in extra water in the saucepan but not overfilled helps and just for good measure I carefully pour a kettle of boiling water over the rice in a sieve over the sink it makes the rice fluffy too.

The good news is there is no research showing increased cancer levels associated with rice, anywhere. That said there is no need to increase one's risk without good reason.

I think we need to be asking where the rice comes from. Any rice from Southern USA, except California is implicated. Indian and Pakistani rice is equally okay. Some rice brands state the arsenic levels in them - these tend to be the better ones for some reason!

Btw research has shown that rinsing / soaking does nothing to reduce arsenic levels - that is a myth. The reason is the arsenic is inside the rice and takes more than just soaking to help release it. Boiling rice in 6 parts water to 1 part rice and then disposing of the excess liquid has been shown to be successful in reducing arsenic.

I will be eating rice less often, still sticking with brown basmati from known low-arsenic sources where possible. In my home I am using my stocks up now and then restocking only from labelled low-arsenic sources. Also will probably eat it only when in a restaurant where it is the best choice from whatever is on the menu.

DMP1391 in reply to andyswarbs

I heard a study proving soaking overnight does affect the arsenic levels, but could be debateable.

My problem is that I can't do the reccomended 6 parts water and discard cooking method because I use rice to make risotto - this involves cooking the rice in stock together with grilled vegetables so the rice absorbs all the flavours.

andyswarbs in reply to DMP1391

Where have I been, I didn't even know there was arsenic in rice, so glad that I rarely eat it. Think I may put something like butternut squash on the side rather than rice!!

Satiating? for about an hour.

Most grains are high Gi and cause unhealthy levels of insulin/IGF-1. Try quinoa, barley or bulgur wheat.

DMP1391 in reply to Concerned

For that reason ride should never be mixed with meat, because high fat and high carb in one meal is never a good idea. Meat should always be eaten without starch or carbs. But consuming grains in whole grain form with plenty of vegetables for fibre is fine for GI levels. It's only when you consume refined white rice with added fat which starts to cause an issue.

Concerned in reply to DMP1391

Yes, rice is an unhealthy choice (along with millet, quinoa, and buckwheat) and pointless. Even the Chinese suffer from digestive distress because of it, and they've been consuming it for a loooong time. Try grated cauliflower instead. I'm not a fan of vegan or vegetarian diets. You can survive (just) on a V diet but you won't thrive.

It's quite depressing how the unnatural V diets have taken hold. V diets are only useful for the very short term (1-2 months) to cleanse the body. I would look at the Ketogenic "diet" (more of a lifestyle really).

I'm not sure what you need but I can't even think of anything else that couscous instead of rice.

Eat healthy on a budget

finding eating healthy is expensive, and there is only so much frozen mixed veg we can eat! I...

How do I stick to healthy eating

Need advice on how to temporarily suspend healthy eating

months - from eating mostly processed foods with a lot of salt, sugar and fat to now mostly plants...

like, everything. I know a lot of people with try and say that i should eat around the allergy...

Hi everyone, I've been trying to monitor my stats more as I think this is a great topic, today I...
•
12 Replies

turning my diet around