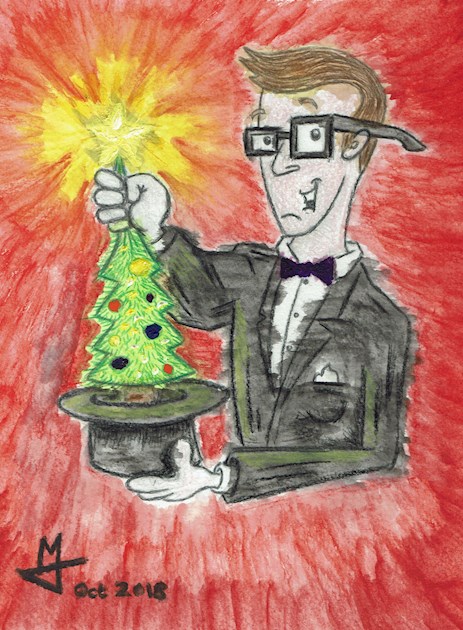 My local Headway know's that I am an arty party kind of person and so they had me in mind when they came across the Co op Christmas card combo.

Last year I entered a christmas card combo but it was held by Thompson solicitor's.

I didn't win last year but was a runner up and my Headway were sent an art box which they passed onto me.

Anyhow, I got word from a staff member at the beginning of the month, would I be interested.

The picture had to demonstrate 'Christmas magic' and at first my design was different and I was going to do the drawing using coloured pencil too which can take longer for me to do.

Half way through my first design I thought about the 'Christmas magic' theme and thought a magician pulling a christmas tree from a hat sounds good and definitely says "Christmas magic" to me, so I started drawing that instead.

I used watercolour pencils as they are a lot quicker and easier to use. I added a little colour pencil on top to add definition and I think it has come out really well.

What do you guys think?

Wish me luck with the combo :).

Matt that is great. You are lucky that you have a good group. I wish I can opening my own headway.

Do you not have a Headway nearby to you?

Sorry to hear that if that is the case. Places like Headway are desperately needed for a lot of people.

It is very helpful that this Headway forum exists.

I hope a Headway opens up for you nearby or I hope you open up a Headway :).

Yes Matt near me there a headway but somebody tell lies and kick your brain (well it's feel like that). I offer a beautiful room with a garden, I have party , my son was write a bid for them. My family runs chairty. I complain so now waiting for minutes and answer for my questions. I love to run a headway group but when they tell no!! 😕. HeadwayUK is great but the group never treat people what they do. Afterwards my complain they didn't come to talk with me. Give me a letter full of lies. HeadwayUK send a nice man to sorting out. Well I hope. I never forget. 😕

I thought it was a pretty clever idea as well.

When I first read that it had to demonstrate christmas magic my first thoughts were a christmas tree with a glittery, sparkly trail.

My mum suggested that I draw kids looking into shop windows in awe while looking at their favourite toy which sounded good but I wasn’t sure how I would draw it.

It also reminded me of the film “Christmas story”. An 80s film with Peter Billingsly. Great film. Amusing and reminds you a lot of childhood too. Have you seen the film? If not, you must.

Thank you :), glad you like the drawing and I hope I win too.

I could win £1000 that would go to my chosen charity (Headway Portsmouth) and I, myself, could win some goodies (don’t exactly know what) and my design would be printed onto 100 greeting cards :).

Yes I've seen that film ; nice feelgood movie (secretly have a weakness for those but like to watch them alone as there's always a weepy bit in there somewhere before the happy ending).

I'm not sure there'll be anything to compare to your magician theme Matt ; it's literal but not at all obvious...…….just simply clever m'love !

I can't see many other competitors doing something similar to me, but then again I could be very wrong. I thought what I did was a kind of 'out of the box' type picture :).

The images have to be sent in by Friday October the 19th.

As I was saying in the original post, I did have another idea in mind that I was working on but since I was notified at the beginning of the month, that would only give me 2 weeks and a bit to complete and I was going to draw it using colour pencils which take longer for me.

The picture I sent must have taken a week or 2 to complete.

Watercolour pencils are much easier to use.

on Facebook by Headway and wondered if the people of HealthUnlocked had spent Christmas in...

of biskwits and some Christmas-themed socks with a strange looking hat. The hat is going to the...

I have one of those cards that state 'I am a Brain Injury Survivor'...

Hope everybody has had a lovely Christmas & looking forward to the New Year.

Had my PIP assessment...