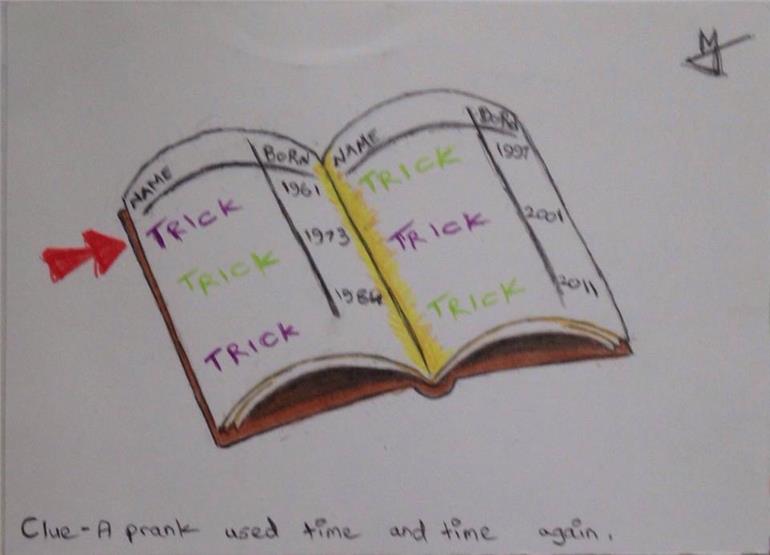 Don't get your knickers in a twist, some of you probably know a bit about me now and that is I like to 'ave a laugh :).

It's actually my last Matt-bat before we have a little intermission where I have to conjure up some more :). So you might see these bad boys every one or two weeks :).

Anyway, this clue is - A prank used time and time again.

Think I've got it but won't say it yet. I hope this isn't your last Mattbat ever Matt, we enjoy them

Matt2584 in reply to Hidden

Nay worries, it isn't my last ever Matt-Bat, I'm going to draw some more :). I was just clowning around as usual :). So turn that frown upside down :).

Up to old tricks?

Matt2584 in reply to Danslatete

'Up to old tricks' is a good guess but the wrong answer.

Do I need to reveal the answer or are people still thinking?

amateurwriter in reply to Matt2584

Hidden in reply to Matt2584

There is the same word written down in a book. Each word has a birthdate.

The arrow is pointing to...?

The oldest trick in the book

Hidden in reply to barny1

barny1 in reply to Hidden

You guys were really close and gave me good clue!

Well, that concludes my Matt-bats for now... Until I draw some more that is :).

Matt2584 in reply to Hidden

Barney got the answer already. It was “Oldest trick in the book” :).

This is a little game I made. I bring these pictures/puzzles into my Headway group and see if they...

I have taken the clue away to make it a little more difficult.

I took some pictures of my work I did years ago. I used to draw caricatures.

sometimes I forget. I think this is #18.

Anyway, who is this?

The last one was Steven Spielberg.

Pip assessment - have to smile sometimes