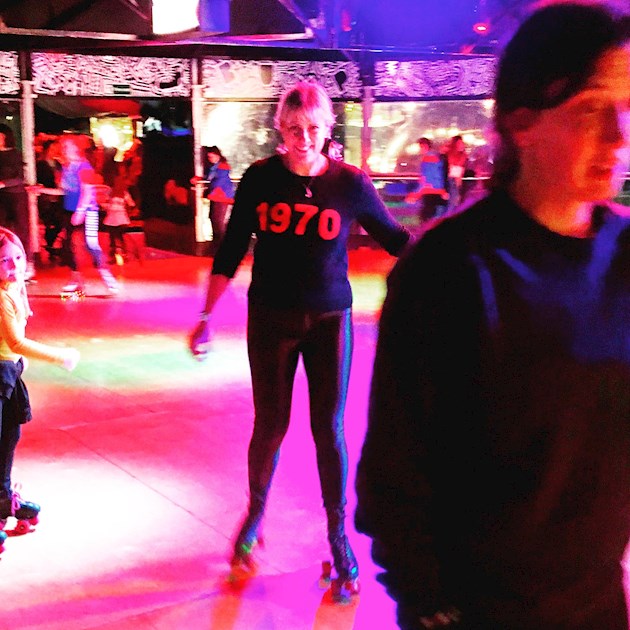 Hello .... I have been on a bit of a journey and wanted to tell you about the last year of being AF.

My intake of alcohol had grown over the years. I’d often find myself feeling fuzzy around the edges and unable to tackle certain things. I realised I had to do something if I wanted to live life differently.

Towards the end of 2018 I read a book called “This Naked Mind” by Annie Grace. It made me think differently about the effect alcohol was having on my life. I took the decision in December 2018 to stop drinking for a whole year.

After two months I felt great. I knew I'd never go back. I felt so alive - so different. It gives me such a sense of freedom. I've got to know myself better and have shaken off many of my nagging anxieties I felt before.

My family have noticed the difference. They say I'm a lot more fun! I do more with them. I've also pushed myself to try new challenges. I recently started going to disco roller skating which was really good fun- much more so without a drink in me!

It hasn't always been easy, and dealing with the here and now ALL of the time is the hardest part. But I think I am slowly getting there.

I would love to hear other stories, and if you have tried to stop or moderate, how you are finding it?

ju-ju-
Ambassador
To view profiles and participate in discussions please or .
17 Replies
•

Hi ju ju, 2 years ago I decided I was going to do dry January, my weekends were starting on Thursday, right through to Sunday night, then other sneaky days crept in!! In January 2018 I decided to give it a go, it’s only 4 weeks! Next came lent, another 6 weeks of abstinence , a 50th birthday, a holiday. The stretch got progressively longer and now I find myself 2 years in abstinence. Every day is maximised, I no longer waste hungover days on the sofa with captain paranoia tapping on my shoulder. It really is a great feeling, work colleagues doubted my resolve as did I, however there were blips on the road but I stuck it out, I haven’t looked back!!

Good luck to anyone starting out kicking the habit....I forgot to mention I also got into running and I’m in training for my first half marathon!!!

ju-ju-Ambassador in reply to Walshy33 years ago

Wow that is amazing, 2 years is awesome.... I started mine on the day before new year 2019 as I thought there was less chance of giving up if it was linked to a resolution. Its really been quite a journey, and I have no intention of going back... but I know its only ever one drink away..... good luck with your half marathon training

Walshy3 in reply to ju-ju-3 years ago

So true, I’m always one drink away from the precipice as it were, it’s a journey I haven’t regretted though, the depression and anxiety that followed a session made me question why I did it! Never mind the financial costs, if someone had mentioned to me 2 years ago that I would be a non drinker I’d have laughed square in their faces!! Hope you’re loving your journey too the best gift you can give yourself xxxx

Hi ju-ju- just wondering what you tend to drink now... I have AF periods but always find it really difficult as I don't like sweeter fizzy drinks / juices, & end up drinking tonic & plain or fizzy water which is a little boring when going out...

This may sound a bit daft but I buy posh water from the milkman ( a local fizzy water thats £1.00 per bottle from milk and more). I only pour myself a glass from 6pm as thats when I would drink and I find i really look forward to it. I am not mad on flavoured drinks or pretend beers etc as I didnt want to replace booze with something just like it.

AF wine is terrible. AF beer or lager is actually pretty good, so if you fancy going to the pub and dodging the water, I'd go for AF Erdinger, or Brew Dog AF beers. No, I didn't drink beer I was a white wine girl. I also enjoy pineapple juice with fizzy water. But then again, I like water anyway...

Good tip, I have never actually tried them as I was wine mostly, but I may just give them a go.

Thanks, I do like (& drink a lot of) water but it's nice to have alternatives... I also sometimes mix fruit juice with fizzy water & as you said, quite nice.

Hey there. Congratulations Ju-ju!!! I stopped drinking alcohol 20-08-2018. Life isn't all pink clouds and unicorns but it is SO much easier to deal with everything.

You put it so well... pink fluffy clouds and unicorns it aint, but its far more real ( I used to liken it to The Matrix when hes offered the blue pill or the red pill).

I have just joined this community for the length of this post, my message is the I don't think any drink firms should sponsor sport, in Scotland and other parts of the UK, all the sporting events except athletics and tennis are either sponsored by betting or drink companies, those should be banned by the government, so glad to know Ju Ju that you no longer drink alcohol.

Thank You for joining, and I so agree with you... its not right at all

So pleased for you.

Way to go,inspiring as always,

Stay strong and keep on keeping on.

Awww thanks so much

Full of admiration for your post, ju-ju- . There are few things in life so liable to self-deception as habitual drinking. I’m plucking up the courage to write an honest post.

Hi I have decided to stop completely for at least a month as binge drinking turned to moderation drinking but more likely I don't know when to stop and got worst lately due to not getting my dream home next door to my mam she's 81 I wanted us to be there for each other talk over fence pop in out and she had 2 heart attacks past few years, my dad died in June of dementia a relief but still sad, my anxiety over thinking mam's next and living at my house were I had trauma of rats flies black Beatles which now gone after over a years wait was a nebours broken drain, I had to drink as trembled and panicked it got to be every night I stayed at mam's for a while but was under each others feet my cats catching virus he never but mam worried about his fur and feet and were always falling over him, so I went back home my gardening helped I bought ants but then it rained for weeks, I longed for the house I had so waited for mine didn't sell so I missed out on it. I started going in park and drinking cans of cider to be near nature and escape from my house and it got more and more, I told mam I need help she said live with her get rid that house and wait for another one nearer to her, I've been drink free for 5 days I felt sad yesterday and wanted drink but it passed I had cocoa and chocolate none alcohol beer after a hot day lol how are things with you x

sometimes more, but when she drinks, she drinks like an alcoholic. I’ve told her that consuming...

Respite from a “trigger”

after the first drink, we’ve crossed that line. Alcoholics have no control over alcohol. It...

with alcohol. It took a lot of years and a lot of alcohol, but she did it. She was an alcoholic and...

My “Joys” of Not Drinking

knew was possible if I stopped drinking, but the knowledge wasn’t enough to stop me. I had to...

My Emotional Connection to Alcohol During the Holidays

24 hours after I stopped drinking. But the emotional ties still haunt me after 20 years of...

My Heart ❤️ Whispered and I Gave It a Try

Am I an alcoholic?

I Stopped Losing My Marbles