I graduated in July and have recently set myself the goal of getting to 10K. What are you doing to get to 10K?

I'm using the C25K+ speed and stamina podcasts once a week. I also do a longer run once a week and try to increase by 5 minutes each week. I've reached 8k. It would be lovely to hear how everyone else gets to their goal. I feel a bit out on a limb after graduation - excuse the pun! 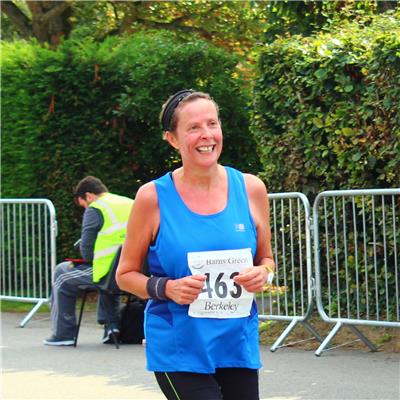 Nevertoolate
Graduate
To view profiles and participate in discussions please or .
15 Replies
•

Hi nevertoolate, I started off with B210k but gave up & I'm now doing very much what you are. I'm using Stamina & Speed, also running to my own music & gradually lengthening my run/adding inclines. I'm almost at 9k but have given myself no deadline, just enjoying the process of getting there however long it takes. Best of luck to you.

Well done getting to 9k - not bad at all!

I was rather wondering about the B210k that everyone was talking about. That's in part why I started off this question. I wondered if it helped any more than doing what we're doing. Why didn't it suit you?

I'm finding the speed and stamina podcasts great because they're certainly helping me to go faster and longer. I've only been going for a few weeks but I really notice the difference. And my weight is going down very, very slowly now. I must admit to being pretty tired after the 8k and wonder how far I can go. I'm pretty sure I could get to 10k but taking it gradually. Good luck to both of us!

I tried the B25K podcasts, but didn't like them. One problem was the coach was too quiet, I couldn't hear her telling you when to stop and start above the music. And two, the music was ok, but you don't run 'to the beat'. The same track continues from the running intervals to the walking interval - I found that confusing.

I had the same issues with B210k as swanscot, I kept missing the prompt to walk. I had some time out owing to illness & had to ease myself back in. These days I tend to follow my own body so only do a longer run/inclines if I feel I've got it in me. 8k is pretty good going too - so is 5k, don't know about you but I wouldn't have believed it of myself 6 months ago. Onwards & upwards.

No, six months ago I gasped my way through those first 60 seconds and thought I would die. Isn't this programme amazing? It worked so well that I'm sure the C25K+ podcasts will be equally effective. I trust Laura! Please let me know how you get on with getting to 10k...and beyond! I agree about listening to your body, we all have to go at a rhythm that is right for us.

I did the same as you - 1 x Speed, 1 x Stamina, 1 x long slow distance run, but sort of following the Bupa 8 week 10K training plan

I started at week 3; that is the equivalent of what we've reached in C25K. To fit in with the BUPA plan, I increased the Stamina run to about 40 mins, but running on after the podcast, trying to keep to a steady ~155 bpm pace.

I had signed up to run a 10K race which came up 6 weeks after completing C25K, so I had a deadline to meet. You can take your time!

Thanks for the link. I had a look at the programme and it looks similar to one I saw on Runner's World. I think for the time being I'll keep to Speed and Stamina because I'm feeling too tired to run 30 minutes plus three times a week. I use the Speed podcast to give myself a break from long distances. That way I have some energy left to try and prolong my "long run" each week.

As you say, we can take our time. There's no rush is there, that's the beauty of it? I'm simply enjoying the process of getting slowly better at it. I don't imagine I'll ever make it to a marathon, but..... who knows!

I'm not sure I'm actively trying to get to 10k at the moment, although I did 6.5k last weekend and could have gone further if I hadn't had to get home. I'm trying to focus on doing 5k faster, mostly because I am time-limited with my runs, but this does seem to have the knock on effect of being able to go further when I do get the time. I've just been going back through the c25k programme with run/jog intervals instead of run/walk and it's working so far. It also relieves the treadmill boredom.

Good for you. I've never tried a treadmill but I can imagine it can get monotonous. I've recently found a local track to run around and that's repetitive enough for me. I must say I like running in the great outdoors. Like you I find I'm speeding up, which is good in that we can go further in less time. I wasn't looking forward to having to run for 1 hour and 20 minutes to do 10k. Best of luck with reaching 10k.

I went from 5km to 7.5km to 10 miles to 10 miles again over a course of 4 weekends. I think I peaked too soon though I my legs felt like lead for weeks after doing the 10 mile weekends in a row. I had a 6 days rest then got stuck back into things and am taking it a bit easier now! I'm doing a 10k race in 3 weeks time so i'm looking forward to that

Well done on the 10 miles, very impressive! It sounds like you increased your distance really quickly. I read you should aim to increase by 10% every week. I'm trying to keep to that and no more as I'm getting really tired even at that level. I can imagine you were exhausted. I keep reminding myself that we have all the time in the world, it's not a race and that the process of getting to 10k is the fun part!

Good luck with the race, let us know how you get on?

I started the stepping stones pods last Monday-had to take the rest of the week off due to a stinking cold and hacking cough, but should be ok for resumption on Monday.

On a personal level I enjoyed the podcast. It was so nice to have Laura (my one fear was her leaving me

). It makes you concentrate on posture, breathing and beat counting, and I was really getting the hang of it by the time the end came at 160bpm.

Once I've completed this and feel confident and competent I will move forward with speed/stamina/free run, as swanscot advised a while back.

This way I am continuing the speed of progression that we had with 5k, which I can manage and over the weeks and months hope to lengthen the time and distance I am running.

Sounds like a good plan Pearsey. I think you're right about following the plan at a steady progressive rate. I'm simply increasing my weekly "long" run by 5 minutes a week, and if I can't manage that, well it'll be by a couple of minutes more each week! I'm in no rush, but it'll be great to get to 10k one day.

Do you think C25K+ should start giving us badges for 10k? That would be another incentive and we could see who to turn to for advice?

I'm starting B210K this weekend. I just didn't get on with the speed podcast, but I might build in stamina to the programme I'm aiming at. It won't be easy and I fully expect to struggle so I'm not setting myself completion targets, but I need the structure of completing 3 runs and moving onto the next step at the moment. I'll see how I get on and then if I need to step back or it's too hard then I'll rethink, but for now this seems like the best solution for me.

Good luck Fraz73 We all seem to have a similar attitude to this, slowly but surely we'll get there and no pressure. I was supposed to go out and do my stamina run today but I feel my body needs a rest. I feel a bit guilty but that's silly,because nobody's pushing me except myself. Have a fun B210k. Let us know how you get on.

Afternoon all! With a bit of luck I'll be graduating tomorrow - last week was the first time I ran...

How to do 5K in a quicker time?

Park Runs/5Ks in a quicker time? I finish C25K in 2 weeks but pretty sure I won’t be able to do a 5K

weather was a bit breezy and with showers of rain, but low and behold by the time I reached 30 mins...

only at week 5 and am jogging unbelievably slowly. When (more like if) I get to the 30 minute run,...