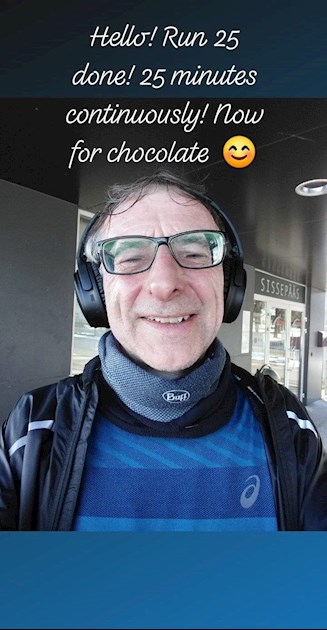 I can proudly report that Week 8, Run 1 is done, but I can't say it was a walk in the park, or even really a run in the stadium!

I rested for two days because I might have overstretched by right calf, it was hurting a bit - beware of cold stretches, even on the gentle Stretch and Flex programme - but in the event it wasn't a problem. My legs felt a bit heavy though.

Breathing was heavy today too, and although I got to the end, it was a slog and I felt I was plodding. I don't know if this was the psychological aspect of knowing I had an extra three minutes to go, making this the longest run yet, or just a "bad run", which I am told does happen. I did it though, which is good. I did not feel relaxed but I have got a lot of mental crap going on right now which to be honest would be overwhelming were it not for the great coffee and restaurants here. But I did it, and I will do it again.

Maybe I am expecting it to suddenly become a breeze. It won't yet at least. I was very happy to finish, and apart from the very first runs, I felt this was the hardest going. At 5 degrees, I was maybe overdressed. (two t shirts, light running coat and gloves). Ok, enough moaning. I am still in the game.

I wanted to tell Laura, when she said "it's not about speed, its more about distance", that actually it's really about the amount of time taken. Distance after all is speed related when you have a fixed time to endure. But it's ok.

I still love her and trust her!

Ooh the pic is from last week but it won't have changed much. Note the freezing Baltic pallor.... 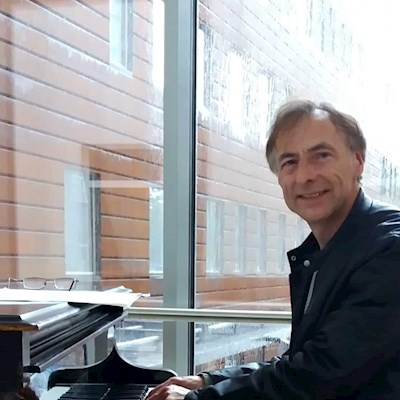 Lesaspie
Graduate
To view profiles and participate in discussions please or .
13 Replies
•

You just need to get the extra 2 minutes, bugger how far you get!

LesaspieGraduate in reply to Jell6

"bugger how far you get!" Aaaah I like that. Nobody here ever says "bugger"... but then they wouldn't, not being an english place

I don't know what the equivalent would be, but anyway, focus.... You are right, and I like the idea of slotting them in at the start. Yah, it's the 30 minutes that is important, and I don't have an accurate way to measure speed or distance anyway.

It's my aspie mind wanting all the numbers to add up I guess.

You do know that 5k is not a prerequisite of graduating don’t you? Despite the name of the plan the aim is to run continuously for 30 mins x 3. Well done today. I actually found W8 tough, which made me a bit nervous for W9, but W9 was better somehow. It’s a weird thing this running malarkey 😁

Malarkey is another great word. My son would say kerfuffle.... I know.... but when i number is planted there, it kind of sits there and beckons, or mocks even. But you are also right. Its the 30 minutes. Yeah, today was tough, I don't know if I can get it better, but come on, already I am complaining. It's bloody impressive to have got this far at all! And my legs are looking great. (I won't post a picture, don't be alarmed.

You're doing brilliantly. Pushing yourself to do 5k in 30 minutes for graduation is the fastest way to the injury couch! All you need to do is move forward in a running motion for 30 minutes - that's it!👍

NilsamGraduate in reply to Speedy60

Yes, I think this needs stressing as so many do stress about it. We will move on from our 30 mins goal. 😎

Bless you! I feel bit better now.... Thanks.

Glad I’m not the only one who sighs at “not speed but distance” line (from MJ in my case)! Still my superhero, though.

LesaspieGraduate in reply to Seaside22

Oh definitely! I cannot run without Laura, and she will have to just put up with me doing the time emphasis.

The great thing about this page is the connection. We experience the same things, the same fears, the same doubts, and we help each other. Thank you!

Well done! You finished the run despite it being a slog! Your time seems quite fast - I was nowhere near that distance at that stage, so maybe slowing down a little bit would help if you are finding it tough?

Well, I cant go much slower

maybe my distance measuring is out of whack. I'll have a think about how to do it better.

You are certainly doing brilliantly given the circumstances. Keep going Lesaspie. Well done. 😎

4.3k is great. 5k in 30 minutes? I’m not sure many actually manage that. Sounds like graduation is tantalisingly close now. Well done 😊

I felt nauseous. Tonight I felt fine having had just a few sips. I did struggle though. I was...

before as the other runs weren't the final goal of the programme, but with this run being 30...

I wonder if my C25K t-shirt will be a limited edition!

The Stars Aligned - and I am Officially a Runner

minute run, with no breaks. It is sort of a reprise of week 5, which has the first 20 minute run...

Can't quite believe I did it! I'd been snacking, so going for a run didn't seem a very...