All Hail the Hippo of Randomness, Icon of Runners - Couch to 5K 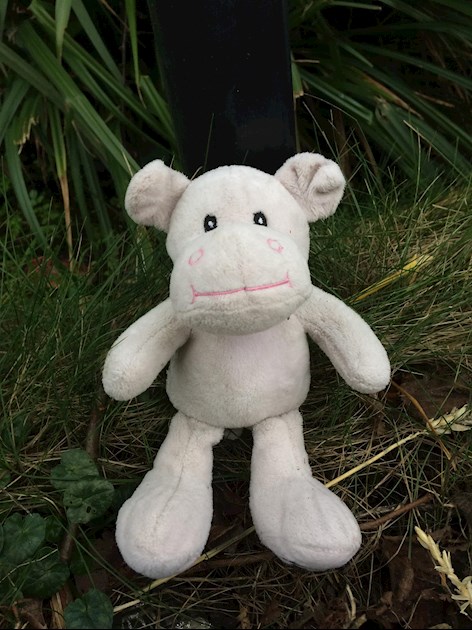 No, I haven't joined a cult. I just thought it was a funny title. You see, during my 5k run yesterday where I once again managed to keep my 5k time to under an hour (not by much but it was still under an hour so I'm pleased) amidst the general rubbish people feel the need to throw onto the side of the road -no I don't know why they do that either, it's disgusting and Dhiny and I are planning on plogging soon - I found something next to a road sign.

A little pink toy hippo (pictured), it was wearing a scarf but the scarf was snagged on something and I couldn't untangle it. I always think it's a shame when stuffed toys are left out in the rain, I don't like it when they're tied to places road traffic accidents have been either btw, left there to just go moldy and fall apart when they can be washed and donated to a charity shop for another person to take home, so I tucked said hippo into my pocket and it's now in the washing machine.

I've decided it's now my running mascot, lol and I don't know, maybe the 'finding a random hippo' made my run go quicker because the silliness of it made me laugh.

Also, let's face it, who before they started C25K hasn't felt like a bit of a hippo? I know I have.

I was down from elephant to hippo a bit back, so I just had to get rid of the sloth, but I hear you. Hope it is a good mascot and accompanies you on many great runs.

Poor old hippo, so pleased you've given him a good home!

How fab is that. 😀. It’s small things that bring the biggest smiles some days.

Well I find it very appropriate - I had the exact same expression on my face when I finished week 1 today!

ALL HAIL THE MARATHONERS!!

that she nicked them out of an OAP's hearing aid. When they played the podcast on the ipod they got...

All Hail The Custard Tart!

consumption should I complete the run. It didn’t touch the sides when I devoured it. I know others...

To all the “older” new runners

runner just about 18 months ago, and I’m still here running (very slowly still) but enjoying it...

Clothing choice for all you runners

could get as much or little running gear as you wished.

Women’s running clothes seem to be a hell...

To all you new runners. Run run run!

I've never posted a picture before