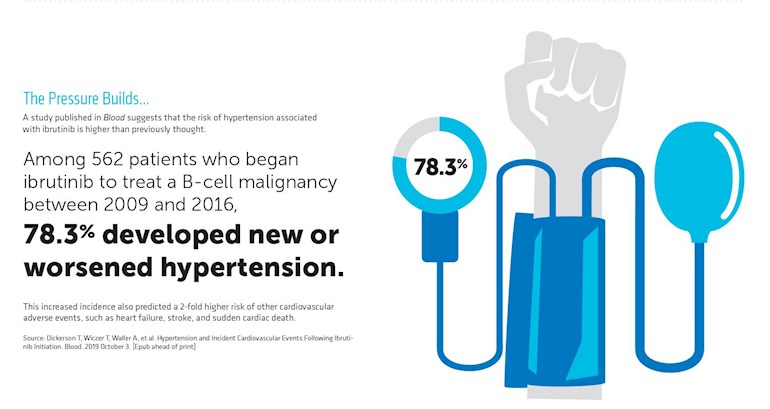 I thought it worth reiterating the high level of hypertension (HT) reported in patients treated with Ibruitnib and the potential for serious complications.

In this study reported by Dickerson they looked at 562 consecutive patients treated with ibrutinib for B-cell malignancies from 2009 through 2016, and assessed the new/incident or worsened HTN. They found:

- the development of new or worsened HTN after ibrutinib initiation associates with a more than twofold increased risk of other cardiac events.

The long-term incidence, severity, and impact of HTN development with ibrutinib are unknown.

I have been on ibrutinib over two years now and it raised my blood pressure. These issues have always been a concern to me. Its extra concerning to read of a two fold risk of major adverse cardiac events (mace) dues to increased hypertension. Of course we dont get any free ride treatments with cll and hypertension is a trade off for controlling a dangerous blood cancer with a simple pill a day.

It is worth noting and comforting, though, that according to the study the risk of a cardiac event is lowered with "antihypertensive initiation" (a fancy phrase meaning to start taking blood pressure medicines).

I am on blood pressure meds now which have no side effects of which I am aware that keep my BP in the normal range. So its not clear to me if ibrutinib is putting me at that much more risk of a cardiac event since my hypertension is well controlled.

My hope is still that in the near future venetoclax will be added to my ibrutinib and I will get a remission that gets me off both drugs. Hopefully once off ibrutinib my BP will normalize and I can get off BP meds too.

I have managed to lose 13 pounds this year, on my way to 25 pound loss I hope. That has already lowered my BP.

What I would take from this for those on ibrutinib is to be proactive about monitoring your blood pressure, control it as best you can with diet and exercise, and get on BP meds if you have to.

If I was starting treatment today I would pick acalabrutinib over ibrutinib with the hope acalabrutinib carries less cardio risks. If I had preexisting cardio problems, I would look hard at taking venetoclax over a btk drug. Venetoclax might end up being the drug most people start on anyway.

I would echo all that you’ve said Jeff

AdrianUK in reply to Jm954

And so would I. Rather nice when we all agree! The only other thing to suggest is that there might possibly be some benefit to switching from ibrutinib to Acalabrutinib if hypertension is present. Of course there is also a draw back from making any changes to a drug regime that is working so I could also understand reluctance to do that.

That wouldn’t be possible in the UK or many other countries.

AdrianUK in reply to Jm954

For sure. I only mentioned it as a theoretical possibility. It might be an option at some point in the future in the Uk and possibly would be already in the USA.

studebaker in reply to cajunjeff

How are you doing Jeff. Did you get results yet ?

Here is hoping for good results 🤞🏻

cajunjeff in reply to studebaker

Hi Dana, thanks for asking. I posted my results on the main thread. As expected, mine was negative. I guess I’ll never know what gave me a fever and the crud. Hope things are good with you. Jeff

I hope all prescriptions MD’s who prescript Imbruvica to patients over 70 years of age are aware of these studies. I have had many discussions about this my different oncologists and it seems that they are more and more agree with me.

Imbruvica is a miracle drug if you have a bulky type of CLL. I have been on it for more than six years and I am very thankful to all that made it available to me.

Jm954Administrator in reply to shazie

Me too Shazie and I'm very grateful.

My Dr said I was just stressed as my BP crept up but I ended up in hospital with a BP of almost 230/74 and I had been running the day before!

This is the thing with data that is immature, no one had any idea how many people would get HT when we started on Ibruitnib all those years ago. Having said that, it was the best at the time and I was lucky to get it

This is concerning. My BP went up while I was on Ibrutinib.

It has gone down some when I changed to Alacabrutinib although still high enough to require 2 BP meds.

They took me off of hydrochlorithiazide when I started Ibrutinib because they said my sodium levels were too low. Of course my blood pressure would increase.

When this covid is over I plan on switching to Venetoclax.

Jm954Administrator in reply to country76

How long have you been on Ibruitnib?

I was on Ibrutinib 14 months. I switched to Alacabrutinib two months ago. My BP is coming down however since my thyroid meds stopped working they increased my thyroid meds which are too high now. I am sure that doesn't help any.

I am able to start walking again which will help.

Sometimes I think I should have done the Gazvya with a little chemo.

Thanks for posting Jackie.

As you know, I already had AFib when the Trial computer chose lone Ibrutinib for me. The doctors were aware but it went ahead although I had to change my anticoagulant to do so. I was told shortly after starting that the rules had changed and I would no longer have been able to access the Trial.

Within a few days of starting the Ibrutinib, my Afib went from being occasional to permanent and was given beta blockers to lower my BP.

My heart consultant has now reduced my check-ups to yearly, my GP only checks my BP if I go for something else and the Trial check-ups do not now include any heart checks. Having said that I do check my heart rate on a regular basis and, because it is now permanent, I no longer suffer from the awful symptoms.

I am wondering if the lack of check-ups will change when they become aware of the report you have posted.

You had a bad time Netty, I know it was scary for you for a while. You did well to persevere and I'm glad it's all worked out well for you

Interesting study and the problems with Ibrutinib and increase in BP, which I already had , was the reason I am on Acalabrutinib.

That must have been scary to see your BP so high Jackie. Did you notice increase over the years being on Ibrutinib or was this one time incident? How are you doing now?

The thing is that, we don’t know if Acalabrutinib will have increase in side effects with more people using it for long term. Therefore, I am inclined to try Venetoclax after this pandemic is over. I have CT scan coming up in August and plan to discuss all of this with my doctor.

The possibility to be off the drugs is very attractive to me, but I am also thinking maybe if Acalabrutinib works I should wait and see how things are progressing.

Thank you to all educational and informative posts on this site.

Jm954Administrator in reply to studebaker

I felt really unwell Dana, dizzy and light headed and I had been feeling like that for a week or so. I had been out running but couldn't manage very far and when I came back I measured my BP because, ironically, I thought it might be low. I thought it was wrong and rang 111 who then told me to go immediately to A&E where they kept checking it but it stayed high.

It took a while for it to stabilise and I changed to an ACE inhibitor after about a year which has suited me better.

I must say, I worry more about my BP than I do my CLL nowadays.

All the best with your treatment Dana.

Same here Jackie. I am more concerned about the AFib than I do about the CLL but I think it’s more the lack of care now more than anything.

I know you have lost some unwanted weight so that will hopefully help.

studebaker in reply to Jm954

Me too and my heart.

Keep an eye on it BP can be sneaky.

It seems that the hypertension ( HTN) seen by patients being treated with Ibrutinib continues to...

Uncontrolled bleeding events with Ibrutinib and in general

Vitamin K shot in the event of a bleed. Bleeding is a concern with patients on Ibrutinib but also...

New Marketing Authorisation Application Submitted to EMA for Ibrutinib for the...

an update on my experience so far. I started Ibrutinib back in October 2017 and started Venetoclax...

What is the follow up regiment when starting Ibrutinib? How to see if any changes in abdominal...