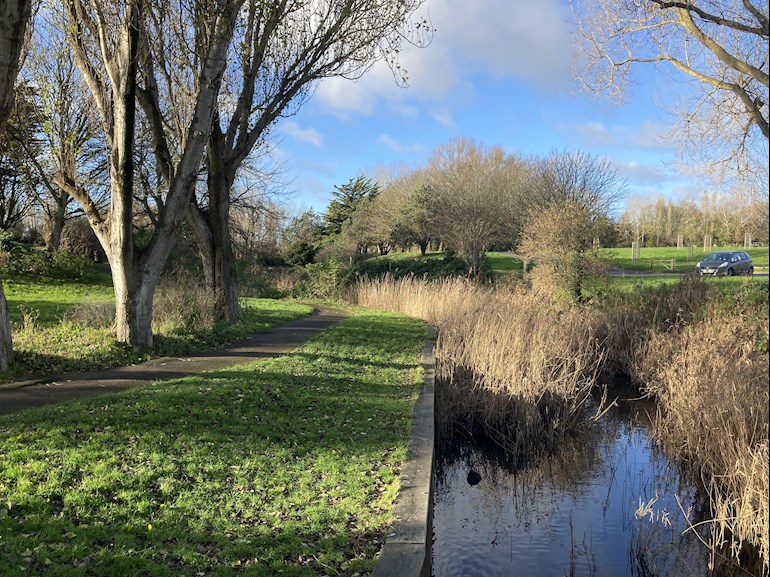 After a birthday that I battled to keep as non event as I could and failed, then between mooching and grumbling through the day we ended up not running or doing anything much really anyway and hat was tuesday …..I now have 5 days off and was determined to lift my spirits and enjoy….. then just before I left work yesterday someone said ooo the pay slips are up! so any of us with a computer had a quick look to see what we’ve got coming on Monday and…. how odd, I earned less than the month before but my take home is more…… I puzzled for a while!!!

Anyway to today, I decided on a NRC fartlek run, nope probably not my best idea, considering the lack of distance or frequency we’ve been running lately.

To the park, we’ve never seen the crowds that were there during lock downs so one happy little dog, one rather pretty grey fluffy dog and one collie. off we go, warm up walk, neither of us has gloves so Willow marching along with his hands in his pockets and me stretching and flexing my fingers to warm them up.

Easy running, harder running, harder still running, hardest running, in between easy running and 20 minute run done. There wasn’t the joy i remembered from the last time I did this run, coach B talked almost the whole time and there was jiggly music in the background both of which I found a little irritating but I ran, covered a couple of kilometres, came home with slightly sore knees but we both ran and that’s way way better than not running

Oh and the payslip thing? Ha, I no longer have to pay national insurance as I’m 66. so after my nothingy birthday I’ve found one huge benefit of being so old 😝

Enjoy your weekend whatever you are doing

WillowandSola
Graduate10
To view profiles and participate in discussions please or .
27 Replies
•

Well done !And i might do a Fartlek run on one of my next two 😁

WillowandSolaGraduate10 in reply to Instructor5711 months ago

The best pace is the one that gives us a happy run !Numbers are irrelevant 😁👍

WillowandSolaGraduate10 in reply to Instructor5711 months ago

You are absolutely right

Well done WillowandSola. If you aren’t in the mood for it I can imagine coach Bennett can be quite irritating. He had me doing spurts of different speeds during my long run this week which I thought was a bit mean, but luckily UpTheStanley joined me for my 8th km which helped me get home.

I assume your 66th also has the benefit of the state pension - all the more to spend on running gear!

WillowandSolaGraduate10 in reply to Dexy511 months ago

Or saving up for that fab holiday when I finally retire, but yes, and the no NI will off set paying tax on it, I have promised myself new shoes, after my experiment of buying a pair of Brooks Adrenaline from ebay for £12.80 and getting loads of wear out of them I’m going to get a brand. we pair exactly the same

Spurts of different speeds are hard work and very mean during a long run, good for UpTheStsnley though running the last leg with you

What a bargain. I rotate between brooks adrenaline GTS 19 and 20 and Saucony hurricane and they will probably all die at the same time. 🤣

WillowandSolaGraduate10 in reply to Dexy511 months ago

I have my original Meraki that I bought after fair analysis and the Brooks, as I have a neutral fair with the specialist insoles I find O can run in almost anything without problems, but my trusty Reeboks of which I had 5 pairs have all gone now and i’m not keen on the newer models. But I’m looking forward to a new pair of Brooks

Good run and post from you W&S, I suppose one of the good bits of getting older,( of course you are young at heart,) is you don't have to pay National Insurance, lovely place to run, have a great weekend. 😊

Thanks Al and you too

Happy birthday! 🎂 That looks such a lovely spot to run.

It was grey and gloomy today but yes very beautiful

Happy belated birthday 🎂, good run and it looks good nice and flat to run , would suit me on my walk jog . Walks quicker than jogging but enjoying it. Not far behind you 66 on 8 th February, not retiring till October when we try and sell shop and wallpaper and paint before then, there will be tears , In Mr D family 135 years , both ready for retirement, look forward to hols like you as well. Have a great weekend.

WillowandSolaGraduate10 in reply to Doris811 months ago

Mormor1Graduate10 in reply to Doris811 months ago

That will be a wrench for you all D8.

Doris8Graduate10 in reply to Mormor111 months ago

Thanks it will. Passed through generations.

‘Moody’ gives it a nice ring, maybe? But, yes, I know what you mean… it looks like our patch of brighter weather has slipped away for a while.

There have to be some advantages to increasing years doesn't there?Well done on that run. I think you have to be in the right mindset for fartleks, but they can be good fun!😁

They were great fun last summer in shorts with bare arms and a big grin, today not quite so enjoyable but yes we did it 😀

That looks a lovely place to run Sola, they always look nicer in the sunshine don’t they?! Hope the knees are ok; as you say, getting out there for even a short run is better than not doing it! I’ve decided there’s not much fun in getting old but paying less tax helps!

Getting old is pants, but being able to run is a real bonus! while I’m off work I intend a short run each day, my knees are fine thanks, it may have been keep changing pace that woke them up. When I looked at the weather earlier in the week it looked like a bit of sun every day but that’s changed and grey days are back

Well done on the fartleks and for managing to cope with CB. 😉 That was a nice surprise for you not to get NI taken off your pay packet. All the more for shoe shopping!! 🎁

I’m getting serious about shoe shopping 😂

And the bus pass is another bonus!

WillowandSolaGraduate10 in reply to Mormor111 months ago

Probably my worst run ever :-(

Went running with the club this morning. They were doing a fun little mini triathlon but as I can't...

I probably should be on an old fogies forum

the last one…… So it’s a grey day and we’ve established that I’m tired and a bit fed up so we ran...

That was the best

Oh my word, what fun!! Willow stayed home in the warm and Jo and I decided to attempt hill sprints,

Best laid plans and a run around the rec

minutes after them The run, boy running all on grass is slower and harder and not what we are used...

Need IT genius for (hopefully) the next "Virtual" ultra-rela...