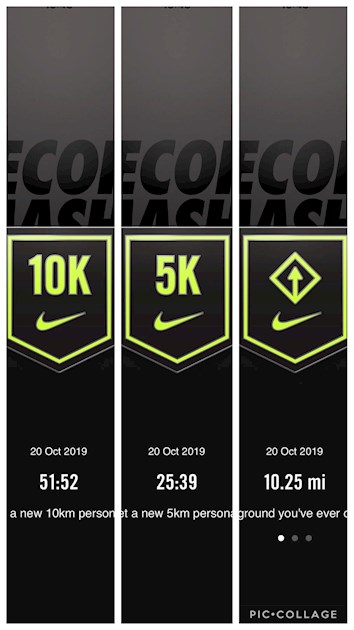 10.25 miles was my target today, and after killing a treadmill on my first attempt earlier in the week I figured it was time to get outside. I decided I’d leave the Garmin at home, I could run with Nike Run Club on the 10 mile guided run, and just pull the phone from my arm strap to hit play again when I got to 10miles as it would otherwise end the run.

Felt pretty good out there today, no pace updates on the guided runs so I relaxed and figured I was going pretty much at my normal pace.

10.25 miles passed pretty soon... lived it. Spent some of cooldown telling NRC which shoes I’d worn, how it was and all that jazz, then saved the run. Achievements lit up all over the place, 3 of which are in the picture... I also nailed fastest km and fastest mile, and a couple of other badges for running regularly.

While I’m pleased with the results (my previous best 10k was 67 minutes) I’m aware that I just broke a cardinal rule, don’t go faster and further in the same run. Couple of rest days I think. 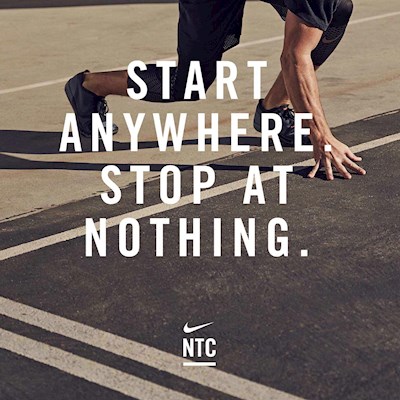 UnfitNoMore
Graduate10
To view profiles and participate in discussions please or .
53 Replies
•

Yes you may have broke some rules but that run looks amazing. A run that sounded just so enjoyable. 😊😊

UnfitNoMoreGraduate10 in reply to Buddy34

Coach Bennet was good too... even went all fartlek on me after 10k

I now know I got 13.1 in me... all I have to do is back off that pace a little and I’m there, so my bad pacing has done wonders for the gremlins!

Outstanding run UNM! Underlines why I keep my eyes on my watch. A nice comfortable feel doesn't tell me the whole story; stride length is a huge influence on my running pace, but 1.13m didn't feel a lot different to .95m.

UnfitNoMoreGraduate10 in reply to Beachcomber66

Thanks... hopefully no DOMS and I’ll be happy!

Of course this means that I should be able to nail 25 for 5k soon, I’d almost forgotten that was one of my goals. My breathing was great today though... toxic 10 must have been having a lie in 🤣

Well, it sounds to me exactly the right way to enjoy a run! 😊👍🎉 I think we can get too hung up on stats as we go, and still I love to look at them after the fact. So you were playing my game here, albeit further and faster than I can consider. But if you enjoyed it, and you did, what could the stats be but icing on your cake?? Well done you. Wholly admirable. 👍🎉👏🏼

Coach Bennett said in the run that the only difference in a first time 10 miler and an elite athlete was some numbers... and we all have many more things in common. Next run is gonna be with the pacer turned on though, a nice gentle and slower run will be needed!

Thanks for you comments... now the shock and panic is wearing off I’m pretty proud of the run.

Sounds like a good run...I bet you're happy, rukes broken or not

Getting there... happy will come if my legs don’t hate me tomorrow 🤣. Pretty proud of the run though... but I need to stick to the rules a little better!

If it was an event you would have given it your all...many training plans take you to a couple of km or more less than event distance and people run the event faster than training.

I think it's guideline that from time to time can be slightly infringed, but generally should be kept in mind

Good point... I was supposed to be going to 15/16 miles before the HM, but my groin strain and virus put paid to that, so I’m approaching it like a marathon would have to be done I guess. The only difference between that day and now is if I get injured now, there is no HM!

True dat. I always do my long runs slowly but don't let the fact that you unintentionally did it spoil your achievement.

Before all this tech you wpuld probably have done it a lot more ; )

I used to do it about once a week 🤣 huge shoutings at from my coach were not unusual!

UnfitNoMoreGraduate10 in reply to cm1987

Thanks. Shouldn’t have done it that way though... was supposed to be a nice slow run.

And it’s not like you did it on purpose.

UnfitNoMoreGraduate10 in reply to Maddee_6333

Thanks, I used to get shouted at by my coach for these types of runs... my inner teenager may be out again 🤣. Still, last year he got me injured, this may not be so bad... locking him away again though!

Sounds wise. Injury is not a thing we want.

Congratulations UNM, excellent run for you today, just look at that 10K time, 67 minutes for your previous 10K to 51.52 today, fantastic, now have a few days rest then train or consolidate your runs for 3rd November. 😊 🏃🏾

Thanks... yeah, 15 minutes off my PB was a surprise and a half! Last week of the plan propped coming up and then a couple of short slow ones in the last week.

Thanks. At the start of the month I decided to drop all the speed work on my plan and just run those sessions easy. This was primarily because of my injury at the start of the plan, so the long runs were behind the ideal and were much more important going forwards.

I remember the advice that the easiest way to go faster is to first go longer when I was starting out on C25K... seems that’s now proven!

Definitely proven, works for us too, what feels like a slow jog is way faster than our first few runs that felt like fast sprints

So much more pleasant than sprint intervals too!

Those first few runs still give me nightmares... and W1R1 remains my hardest ever run.

I got home from work two days after run one thinking blow this i’m not going i’m shattered and stressed to find Willow ready with a cup of tea in shorts saying are you going to get changed or drink your tea first? i thought for fiddles sake i’ve been on my feet best part of 25 hours and been told i’d forgotten to do something so felt pretty rubbish at said job but we went and i came home having wiped out the stresses of work and was hooked

I’m sure it’s not all glamour... sometimes these musician types have to drink too 🤣

That second run story is great... one for my “recall these on tough runs” collection. People here get me through all the hardest ones.

Usually I drive to a run, change shoes, and then have a quick peek on here... if anybody has just finished a really tough run that gives me something to follow... and fortunately there’s always newbies on C25K so it doesn’t take too long to find one!

... and now here you guys are, inspiring many more runners as they start their journey. That’s what it’s all about.

Yes very true, and Willows nearly recorded his New Year song which is a dance track so we doubt it’ll go on our run playlist

Could be good for warmup though!

It’s quite jiggly but is nearly done and is good, he doesn’t alway sing on his tracks so a treat for me when he does

UnfitNoMoreGraduate10 in reply to Fabulous450

May sleep well tonight! Thanks

UnfitNoMoreGraduate10 in reply to JonathanP

So speedy, well done you!

Thanks Baddie, back to normal running this week I think! Legs don’t hate me today though, which was a surprise.

oops and secret great in a way! I think though most importantly, you didn't try to run fast and you were clearly running at a pace that was comfortable to maintain so I wouldn't worry too much. Hope you are ok after it though!

UnfitNoMoreGraduate10 in reply to Couchpotato2

Thanks, This is all very true and everything still feeling great, so a little run tomorrow and it’s back on with the watch!

Couchpotato2 in reply to UnfitNoMore

Sometimes your body needs a little stretch (faster run). When is HM?

UnfitNoMoreGraduate10 in reply to Couchpotato2

The 3rd... one more long run and then taper

Couchpotato2 in reply to UnfitNoMore

Oh quite soon so take it easy! That’s come around fast.

UnfitNoMoreGraduate10 in reply to Chris141

Thanks. Body is all feeling great still, so I think I have “got away with it.” I think I’m getting paranoid about injury as the HM is very close now... but I tend to get myself injured on rest days if anything 🤣

You know as well as anyone that some days our runs are inexplicably rubbish and some great. You've been lucky enough to have a great one. The stars very much aligned! Take it, hold it close, remember they don't come around too often 😉 xx

Thanks... and good thinking, set all the records when the stars are aligned so I’m good to relax as they all say 2019 on them now!

Your body doesn't forget how to run

for a run, that's slow and short too!

I've put on half a stone since we got him. When I was running...

Almost had the 10 mile run nailed but...

Worst run in a long time!

Armed with my decision to run slow I’m off.

I think I’ll try and cover 7 miles in the hope that...

How do you fuel your runs vs. non-running days?