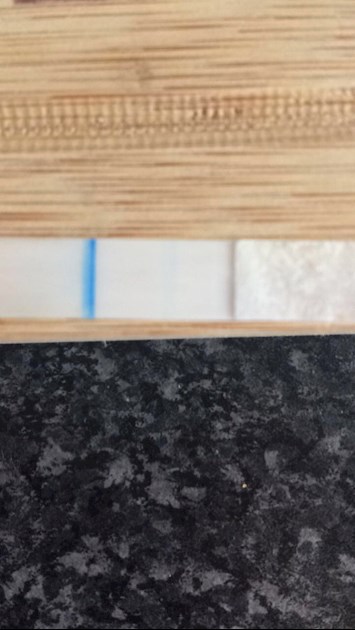 I took a pregnancy test yesterday morning and thought I could see the faintest line!!! And I did the silly thing of taking the strip out of the test, the line was clearer and much more visible. I took it out within ten mins of doing the test.

I know they say a line is a line but I've been reading up a lot and they say that taking the test apart can cause false positives and you shouldn't trust blue dye tests altogether!!

As much as I would like to take this test as positive I don't think I can trust that sneaky little line!!

Any advice would be appreciated!! Especially if someone has had something similar!!!

Amyjeffries in reply to nae93

I have some more coming tomorrow, but pink dye ones x

This would indicate to me that you are pregnant, however I would repeat because you have taken the strip out of the test which you're not meant to do and it could be an evaporation line😂. The faint line indicates a lower level of hCG which would suggest that you are very early on in your pregnancy. The line would become much clearer as time progresses as your hormone levels increase.

I had issues with home pregnancy tests in that one had a very faint line and the rest were negative when really I was pregnant. I would put this down to the fact that some tests may be more sensitive to hCG than others.

If you get similar results with the next tests you do then I would go to your doctors and ask for a blood test to confirm as these are much more accurate.

You will need to repeat the test. It may be because you have tested too early, and it's always best to use the first pee of the day as it's the strongest. You should always follow the instructions exactly as they say on the pack, as it will not be accurate otherwise. Use a timer on your phone etc, as it can be tempting to read it before the set minutes have gone by. If your period is late, lighter, shorter or doesn't come at all, or it's been 3 weeks since last sex then a PT will be accurate now. Good luck.

Is this a line or evap?

I took a test yesterday using the last strip I had in my cupboard and the tiniest line...

had sex with my fiance.

I had a faint positive pregnancy test on May 18th.

Can anyone else see it?!

So I took a test Monday morning and could see a veeeeery faint line but my husband couldn't so took...

Am I pregnant or not?!

didn’t think much of it. I took another test first thing in the morning which showed just one line,...

3rd trimester, covid guidance and being made to work despite it not being safe to do so. Help!

coronavirus risk after 28 weeks of pregnancy.

3rd trimester, covid guidance and being made to work despite...