The Present.: Puss brought me this... - British Lung Foun... 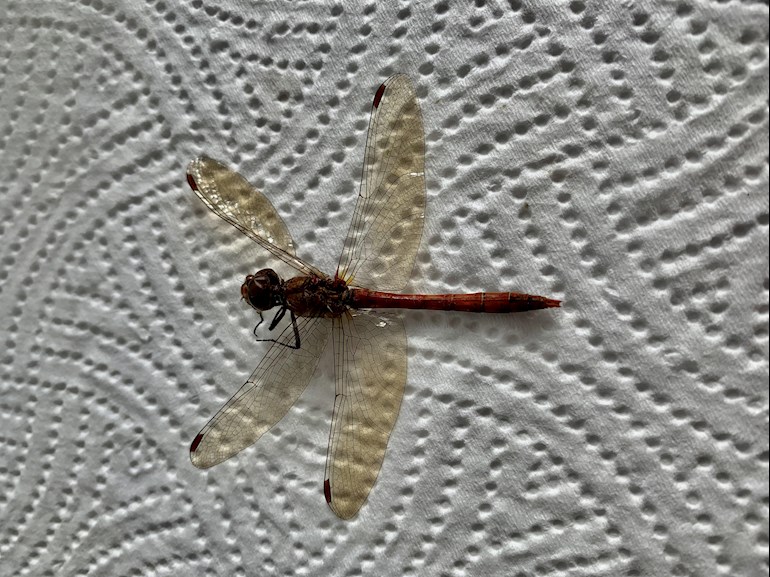 Puss brought me this present this morning. I think it is a dragonfly but I’m sure one of my knowledgeable friends will be able to tell me all about it. I hope she wasn’t responsible for it’s death, it looks totally unharmed. 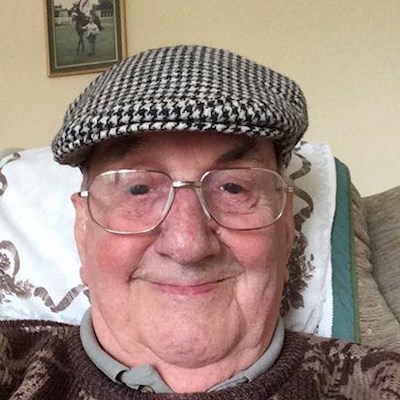 Don-1931
To view profiles and participate in discussions please or .
52 Replies
•

She is giving you presents !

Strewth! A cat with class, that's a beautiful present I've never seen one of those up close before. One dead bird and she is in serious trouble.

She has been very gentle with it for such delicate wings to be intact. I think it may have already been dead before she brought it to you but we can't be sure.

What a beautiful present puss brought you to she must have been so gentle with something so delicate. Have a lovely day and take care 😊 Bernadette and Jack 🐕 xxxxxx

Set to work Master Po and let us know what it is?

Don-1931 in reply to skischool

Annie31 in reply to skischool

Plenty of choice with that selection! I've only ever seen the emperor dragonflies and they are really big and the mayflies or those you see in the late spring. We used to get a lot of both around our pond.

I always found it hard when my cats brought me ‘gifts’. Hopefully someone will be able to enlighten us as to what that dragon fly is.

It’s a sad day, the weather is so bad the ferry has been cancelled and we’re it off from the world again, and I’d ordered a chocolate eclair. As you can see, a sad day indeed!

I think you are going to have to find a recipe for making your own chocolate eclairs HH, the elements are against you. As regards the dragonfly, I think I'll have to resort to my childhood method of carrying it around in a matchbox asking people to take a look at it.

Is it the weather again , windy ? I read that ferry company cal Mac has problems all the time . Is that your ferry.?I have 2 pilots in the family, can I arrange a emergency eclair drop.? Though if the weather is bad then a light plane is off too. Sorry .

It’s unfortunately the weather. I was all ready for the emergency eclair drop. Thank you for the offer 😁

So sorry to disappoint you. Maybe the lifeboat crew might help if they are passing .?

The ferry had been cancelled again! 😯 And the forecast is for the weather to get worse as the week goes on, therefore the next ferry is expected to be cancelled too. I think I’ll have to declare a state of chocolate eclair emergency!

That is dreadful. i read that everyone is up in arms about the ferry service. Send an SOS to the RNLI. You will have to learn how to make eclairs.what about the sheep . Not suggezting they coukd make eclairsHave you got turnips for them,.? Seriously what happens when your food supply doesn't arrive.?

CDPO16 in reply to Jaybird19

I think the same thing happens to the Isles of Scilly, especially during the winter months and they aren't as remote.

You don't have an airport on your island?

Best little airport I have ever seen is on the Isle of Barra in the Hebrides, have been to little ones on various greek islands with interesting approaches and hazards ( goats on runway at Skiathos.) And traffic on road near runway in Corfu, controlled by traffic lights (there the planes' wings sweep over the road as it turns at end of runway )but the best is Barra where you land on the beach and arrival time is governed by the tide. This was in sixties but it is still used and has grown and now has reception buildings instead of the garden hut that was there then. Still have to wait for tide to go out. Regular run from Glasgow

Sounds very exciting. Back in the sixties we had pleasure flights from the beach. During WW2 Mosquito bomber/fighter planes which were mainly made of wood landed and took off from the beach after repair at the aerodrome where my Dad worked.

My dad did that too.! He worked at Helliwells at Aldridge Walsall repairing damaged planes He gave us as children a lifelong interest in planes with visits to air displays on Bàttle of Britain Days Sept16?. Didn't hear anything about that date this year

Southport has an annual air display the last two were cancelled of course as I expect all air displays were.

There have been some apparently but now just shows , and not in remembrance. Incidentally a Spitfire has just changed hands at £3.1 million. How do you insure that.?

Definitely not safe parked in drive,!

Best put a wheel clamp on it. 😎

HungryHufflepuff in reply to Don-1931

There’s a tennis court on the runway. It’s the only flat bit of land so where better. Know your timetable! I must say I’ve never seen anyone playing tennis. I think the ball would blow away. 🎾

Yes 👍👍 But the planes are cancelled too. They’re tiny 8 seater planes and don’t bring supplies. Sometimes they bring letters. Thankfully I’ve got several turnips for my sheep, for now. Unfortunately I ordered some wellies as one of mine split so I’m walking around with one wet foot, so I’m really wanting my wellies to come! I think getting my sheep to make chocolate eclairs is a great idea!

A beautiful present Don! You are very much in favour

Cats can be incredibly gentle, my last one brought in a frog. The whole of it's body was in his mouth with just the back legs dangling down!! He put the frog down in front of me and it was completely unscathed! I heard somewhere that it has been a good year for dragon flies, though obviously not this one!!xx

Small red damselfly ? I tried google , but that said found in the New Forest , so probably wrong .

No I am not swearing .

Hopefully a proper expert will know

It's certainly a dragonfly, but what sort? It's sure to be a 'common' something or other, the posh ones will be on the other side of the railway track.

skischool in reply to Don-1931

Could it be a 'common darter' or a bog standard red damsel going by the guide i sent you,you may also have to do an autopsy to establish cause of death?Have fun and we will next see you on Autumn watch no doubt. Lol

Don-1931 in reply to skischool

Well Detective Skis, since this involves an unexplained death it's your job to investigate. I won't be commenting further since it will be under investigation and Puss is claiming diplomatic immunity. LOL 😹😂xx

skischool in reply to Don-1931

Damn cat,must be American or from the middle east😂

Puss must really like you to be bringing you gifts. X

I beieve cats bring us presents as a way of thanking us for caring for them. xx

It's a Sympetrum sanguineum, alias a ruddy darter, a small dragonfly. They seem to be having a good year as I usually see more of their plainer relative the common darter, Sympetrum striolatum. They are fond of sitting on fences, which makes them much easier to photograph than their big relatives- and to catch. Excuse the Latin- my first dragonfly book had all the pictures labelled in Latin, so they could sell it to the French, the Germans and anybody else.😊 PS a lot of dragonflies and damsels are moving north as a result of global warming.

Good afternoon Mr.D and Puss Cat and "dragonfly". Our clever member Hoobs, has given some good info and I'm going to agree. Not because I've any knowledge or have tried to Google it ..... i just like the idea that Puss Cat very carefully transported the dragon into your house, without any damage at all. You also brought back memories of collecting anything creepy crawley and keeping them in a matchbox. As soon as my Mother saw that was it- straight out the house and into the bin. That's how it was in those days I'm afraid. Well done Puss Cat🐱!!! 🐿🥜🥜xx

Wow, Don, I can't imagine the care Puss took to reward you with such a dainty, intact present! None of our cats have ever brought something so preciously. Our resident feline, 'Missy the Cat', doesn't bring us gifts. The neighborhood peacock taught her from the beginning that feathers are not to be messed with!

She loves you x

Am I the only one who doesnt think it's beautiful. I hate any insects they scare me.😱 On the other hand very clever cat not to have harmed it bringing it to you. xxSheila 💕

That’s probably because of all the time you spent abroad where something looking like that would have your arm off. Theses are harmless. 😘xx

Most probably you are correct Don. Camel Spiders and Cockroaches were the ones I hated most. The cockroaches would fly and land on you Ugh ! If we left our outside light on when we went out at night when we came home there would be camel spiders on our front door.

I will take your word that the dragon fly was harmless.

Enjoy your day ,I am now shuddering lol. xxSheila 💕🕷🦟

I'm with you Garshe! Don't like insects at all( I'll make an exception for ladybirds!) When I lived in Spain, my friends cat used to present her with those little lizards and chase cockroaches round the floor!🙂

Oooo, that's much nicer than the headless mice our cat used to bring us! I think it may be a Damsel Fly. xx Moy

What a careful puss!!

What a thoughtful muggy. I do believe you’re right, some kind of dragonfly 🐞

That would be muggy 🐞

Don-1931 in reply to Nicholatracy

~PRESENTS FROM A SHEIK

The Sheik insisted so she said she had just started golf

The best presents are often the inexpensive ones. My favorite this year is my ELO CD 'all over the...

Just had the most wonderful Christmas present. My eldest son who is now 50. Has gone to Australia...

An early Christmas present for me

injections in my back on the 20th December. I am so hoping that these will work this time and...

I am fortunate that my COPD is at present only mild

am only a bit breathless. I have been diagnosed about 18 months ago but am finding I am getting...

Just popped by to say highpaw to everyone 🖤🖤

Wouldn’t it be lovely – Volunteering for the NHS