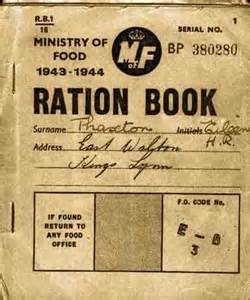 Growing up during WW2 left me with a habit.

Always eat what’s on your plate, even if it's stewed rabbit.

With rationed food you had no choice, waste was not an option.

Or my parents might consider me, suitable for adoption.

Now we live in plenty, but I still feel the same.

A suffer a condition that really had no name.

I always have to eat it all or else it spoils my meal.

My problem is there's always more than I can usually deal.

They don't do smaller portions and have to charge you less,

Just leave what you don't want they say, when you have done your best.

Once I ordered a child size portion, of a smaller size.

That came along with something, which gave me a surprise.

A pic of Thom the Tank Engine with a box of crayons upon it.

Along with what I'd asked for, a double gin and tonic!

Today I saw the doctor when I made a call,

I have an abdominal hernia, which might explain it all.

Oh Don, that's wonderful (not the hernia of course) and my parents brought me up not to be wasteful either. Xxxx

thats because you are a gent

and i am just a pup

Magpuss in reply to Hidden

An always hungry brother would have helped me out but if did, he'd get my pudding too and that just wasn't on.

Hidden in reply to Magpuss

Yes lol and we did have a telly xx

Just shows how bad the programmes must have been. LOL

Lol I only remember pick the box pick the box ...the royal variety show ...bill and Ben which have now turned in to Don and Skis lol xx

skischool in reply to Hidden

i will get my own back scally lassie xx

Hidden in reply to skischool

A Ready Meal I did heat

But much too much

It's got me beat.

Hidden in reply to knitter

I picked up a ready meal that I thought said 1 of 5 like lot of stuff does. I enjoyed it, it was just the right amount, looked again at the package and saw it said Age 1 to 5.

skischool in reply to Hidden

I bet Midge and Scruffy eat more than you and i do Don.lol x

Hidden in reply to skischool

Maybe by the size of them but not by the number 🙄

Those of us brought up with rationing are all the same I think. I still hate wasted food. I also still have memories of my English teacher who used to coerce us into finishing our school dinners by telling us to "think of the starving millions". Fortunately the school dinners were pretty good.

My mother was born in 1928 and she sounds so much like you before she got alzimers ten years ago, she died last year but I have really great memories when I was young from both my parents, I practically lived with my grandmother who by the way lived right next door to Mam and dad, every night I came in from school and my grandma would have a spotted dick pudding for my tea, and I would make the custard over a coal fire as she never could get that right. However I too had to eat every bite, it was never right to leave anything on your plate. Not that it was a problem to me as I always had a great appetite. I invited a friend back once for tea and she couldn't get over the fact that I had a pudding for my tea and nothing else, but I couldn't get over the fact that she had a dinner before a pudding lol. Interesting how people are brought up differently. Some with a lot and some with a little, it never has stopped me appreciating everything I now have. Take care.

During the war I was a country lad in Surrey. I remember we were fed, Rabbits, the occasional Hare, Pigeons and once I remember a Pheasant, which my Dad was keen on shooting. Occasionally we also had Carp, Perch or Pike, when Dad had some spare time to go fishing - he was a fireman. My Mum and Gran were expert cooks and prepared it all roasted, casseroled, stewed and occasionally grilled. I remember they made delicious sausages using minced Rabbit and Pork Hocks (which were not rationed) plus wild herbs and seasoning with, breadcrumbs from some of the less tasty stale 'grey bread', our veggies were nearly all home grown on the 'lotty'. The food was good, tasty, cheap and plentiful enough for us kids. I also think it may have been better for us than the pre prepared food served today! Without doubt we were very lucky living in the 'sticks'.

I think you sound as if you had a fantastic childhood. My dad had an allotment and grew veg but he also had hens, he sold the eggs, he worked down the pit. I had never even heard of pheasant or partridge etc but we did eat rabbit, everyone did I think, or that's what my parents told me lol. It wasn't till I met my husband that I got into things like pheasant etc we met at 17 and married at twenty. He was into going beating and shooting he would always get pheasants given as a result of a full days work etc, which I have done myself also, when I was fit. he was also into fishing and was a diver so we have never been short on good food on the table of the land and out of the sea, for as long as I can remember, till he had an accident on the oil Riggs a lot of years ago, just shows you should never take anything for granted, here one minute gone the next. Not my husband but the way we ate, I've always believed in healthy eating and my passion is cooking good meals for my grandchildren whom I'm

Pleased to say really appreciate the effort I have to go through now. I grow my own herbs also outdoor tomatoes every year, and my own children have taken a lot of interest in the same things as me. If I get remembered for anything I hope it will be for my cooking. Great to hear your story. X

Rabbit!! We were lucky if we got a sniff of a cat's tail.

Sorry I’ve not been around...

I’ve lost half a stone up to now by just eating smaller portions and reducing my bread and Lurpak...

have always read that sugar is inflammatory and very acid, but I thought I was ok as I was eating a...

Do you sometimes find it difficult to decide whatever is ailing you at the time is just another...

Chopping Up Ginger and Looking At Frogspawn...

blamed the herons, they'll eat froglets and tadpoles of course.

Frogspawn always reminds me of the...

Feeling sorry for myself :(

I have been Asthmatic for 58 years (I'm 61) was always having attacks when I was young then in my...

GPs are told to screen patients online or by telephone and d...