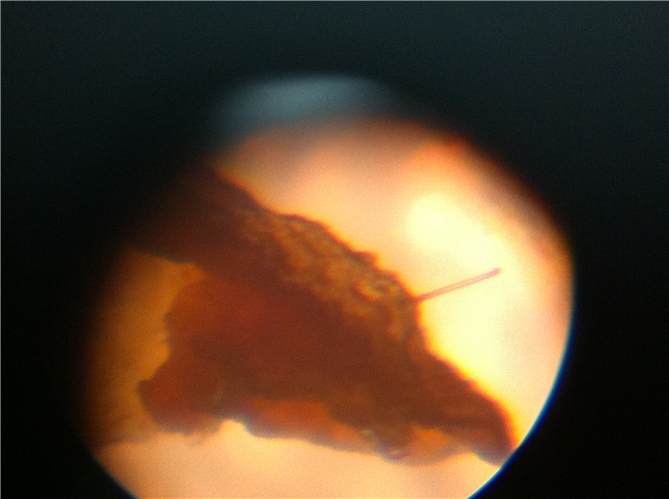 Something not so very nice .. Who would think your lungs own defence macanisams would try and do for you.

But what i have managed to ascertain is when i inhaled various asbestos fibres .

Curtsy of my last school employ my lungs / body as been trying to do for those asbestos fibres.

Your lungs over dose on iron and your bodys / lungs hydregon peroxide anti inflamatry responce to asbestos foreign bodys in your lungs cause the macrophages to leak all over your alveoli or grapes causing them to explode.

Then the pigmented macrophages with asbestos bodys traped start eating away at your health lung tissue like a never ending cycle ... causing breathing problems / infections miss diagnose until you succumb ... to asbestosis.

As you can see by my picture am very lucky as am expelling toxins and bits of lung tissue but " is that down to vitamin b12 " or is it down to lung specialist telling me to use good bits of my lung a was lucky to save threw bad breathing.

Hope you get a better answer than me, Daz, because all this is interesting, but I am no expert. What sort of gadget do you have to show images like this? All the best - Annieseed

Hi annieseed ad like to say something dead technical but alas nor its just a kids microscope a used.

Is from science museum tho but ye just focused it and put phone camera up to eye piece and took picture.

Good luck to you Daz. You certainly seem to be very positive and I hope that research into this will help you and others in the future. Take care and best wishes to you. Carole xx

Hidden in reply to sassy59

Hi cheers ye there is quite a lot being done .. Well research and only sticking point is latency period and why it takes so long .. a wish a new answer to that one.

On plus side there is hope for young one's as thay have discovered how to make iron enert in asbestos fibres using microwaves radio therapy ... So with a bit of luck all this wifi mobile phones might be doing some good "but don't quote me on that" cheers all the best

If knowledge is power then you must be getting very powerful, Daz! Good luck with it all. x

Hidden in reply to Toci

Hi cheers i wish i was

Hidden in reply to Toci

Give some lectures, Daz and rake in some money because it is interesting.

Hi anniseed would be nice but don't think i have lung function .. And a think it would be more of a lecture than interesting but hay a accept all forms of payment expect live stock its a hairs thing :))

In my younger days I used to cut Asbestolux on a circular saw with nothing more than the workshop windows open. I was told that this was not the bad blue asbestos? Asbestolux 16 to 30% Amosite.

Now I wish I had not looked into this

It is not good for you at all something else to speak to my doctor about it seems.

Hi offcut ... Defo not good but like you say about being younger a was 28 when i worked there .. Employers take advantage of you youth and your willingness to please ..

I was 15 (left school early 1970) We were cutting this stuff every day when we converted to natural gas to keep people house fires up to regs. What has got me the supplier said it was safe? I have always said when asked if I have been near asbestos NO!

Hi if a was you a would research it further.. Do internet search see what turns up

A can belive it .. Did thay say what caused it i surpect lungs had buliders in doing some remodaling

No all that has happened to date is 1) Angiogram 3) Ablations 9) Cardio Versions and a bucket full of pills that are changed at some point or other. I am also allergic to iodine/trace. Seeing Cardiologist early next month to confirm installing Pacemaker which they have said would mean removing my sinus node as well which will make me pacemaker dependent

So if we are nuked or hit with any EMP I will switch off.

appyalison in reply to Offcut

Hi of cut, good gracious. I think you should be telling someone you worked with asbestos. They can decide how safe you were. good luck

So sorry offcuts .. Giving me the willis .. Dont think you don't have to worry about being nuked long way of yet .

Amazing stuff Daz. Hope you are OK at the moment.

Hidden in reply to appyalison

Hi cheers ye am as good as can be

Hidden in reply to hufferpuffer

Hi Daz. Have you thought of taking up photography?

Hidden in reply to KingoftheCocktails

Hi nar its not for me really unless its unusual stuff

KingoftheCocktails in reply to Hidden

I thought your photo was a bit unusual !

hi Dazisnotsogood i do so admire your tenacity i take my hat off to you trailblazer .Janexx

Hidden in reply to longlungs

Hi longlungs cheers am not a fan of injustice or discrimination thats what keeps me going .. But this is one a wish a did not have too but needs must

longlungs in reply to Hidden

hi of course you'd rather not .im with you there re injustice or discrimination sorry you have to fight so hard but pleased its what keeps you going kinda.what has this indestructable fibre done to you exactly im sorry idont know im guessing asbestosis ? excuse my ignorance.Janexx

Hidden in reply to longlungs

Hi longlungs its good you ask that .. What as it done.

Well my lung specialist says i have bronchiectasis and i would agree as asbestos fibres are quite toxic to your airways thus causing infection then we have emphysematous bullea referring to destruction of lung tissue and formation of bullae caused by Asbestos fibres messing about with cells thus causing inflammation necrosis more emphyaseaous changes untill a get or is it predisposed given my disease and tissue i have been coughing up with asbestos fibers sticking out puts unfortantly put me in league of as i have said predisposes me to mesothelioma well i i hope am wrong but when i seen nurse she was looking at my file and going on about arbourtry oxygen ... Like really a dont need out like that

If you have been diagnosed with asbestosis, you may be able to claim compensation. There are three main types of compensation, which are explained below.

you may be able to claim a lump sum in compensation under the Pneumoconiosis etc. (Workers' Compensation) Act 1979 if you have asbestosis or you are the dependant of someone who has died from the condition, and you haven't been able to get compensation through the courts because the employer who exposed you (or the person on whose behalf you are claiming) has ceased trading

Hi offcuts .. Yes i have had belly full of IIDB and So Called Atos HCP thay need to read DWP hand book on asbestos and chronic lung disease .. First my GP said i was suffering from panic attacts .. So had to fight to get them to refer me to lung specialist .. DWP and Pip think am fine becouse my GP Said had a cold ... Its been a joke .. Go on my profile and read my post think you will be shocked as am sure my ages is going agaist me

I am 58 and was exposed to Asbestos for 20 years in an extreme way ( cutting on a circular saw with no extraction or face masks) I was not cutting this every day. It is the fact that the supplier said it was not the nasty blue but did not say it was the second worse brown asbestos.

I read your profile and I see you have been fighting this and I would do the same and probably will. I have had similar problems with doctors past. One doctor told me not to worry about my heart I am now awaiting the decision on becoming Pacemaker Dependent. Another said I had a mild cold but when tested at hospital weeks later I had Glandular Fever, this same doctor refused to acknowledge I had asthma. It was not until a locom was at his practice who specialised in Asthma put me on the correct medicines. I am forever asked if I am COPD by various nurses doctors specialist, but have never been tested. but I get the impression that I should accept I am ill and live with it?

My lung specialist as said all sorts copd asthma bronc emphy like really would not think you could have all that .. To be honest he should just fes up and admit it .. But recived my tribunral date today so writing to papers to see who fancys covering my story and coming tribunral

there asbestos fibers where sticking in my lung tissue and my bodys amtiinflamarty response caused...

other asbestos related illness its just as grim. SEPSIS as in my case is caused by iron in asbestos...

Dying From ASBESTOS And Having TO Prove IT

I can feel a FOI request coming on re lung cancer biopsy and asbestos bodies...

☠ ☣ Asbestos Fibres Being Engulfed by Antibodies Under Microscope.

Quite a story finding asbestos fibres being engulfed by antibodies macrophage 's LIKE where do I...

Tad Graphic : You Ever GET The Feeling A Pervious Occupation Is Coming Back To Haunt You

Should COVID vaccines be compulsory for care home staff? Exp...