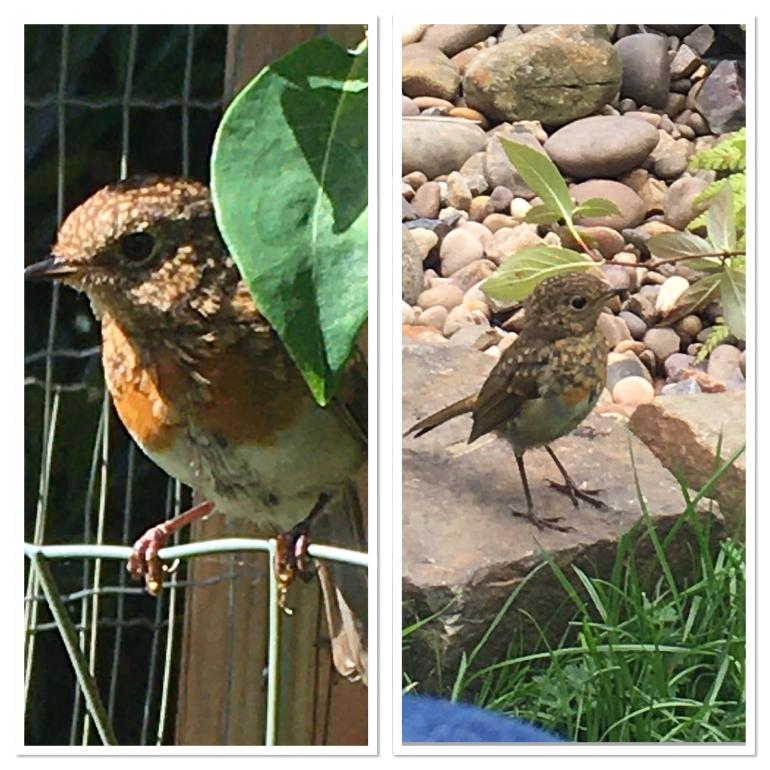 What a difference a week makes ! There isn’t too much difference in size ( I’ve zoomed in this week to show his new red feathers which are much more prominent now ! ) He still has his juvenile feathers covering his head and neck but he’s definitely developing the robin temperament, last week he was very wary of all other birds this week he decided there was no way he was sharing his mealworms with a sparrow and promptly shooed him away 😂

Thepainterswife
To view profiles and participate in discussions please or .
41 Replies
•

Oh how very cute 🥰 He’s very handsome! I love all the birds…except 2 big pigeons that intimidate all the other little ones in our garden!

Yes I have wood pigeons who are very cheeky but they won’t disturb the other birds if I’m about , they sit on the fence and watch me from the corner of their eye pretending they’re not interested in the food I’ve just put out then I put some on their table and they’re like gannets !!😂

Just had to share another photo ! Whenever I go in the garden my little robin appears beside me within minutes and follows me around . Tonight having avoided the heat of the day I went out to do a bit of gardening and whilst I trimmed some shrubs beside him Robin took his evening bath , he’s so sweet 😭

Cooling down in the evening

Greenthorn in reply to Thepainterswife4 months ago

Thepainterswife in reply to Alberta564 months ago

He is Alberta , but I worry about him like he’s my child 😂 xx

Alberta56 in reply to Thepainterswife4 months ago

So very beautiful I love Robins they are such cheeky little birds. Although imlovebany birds, thank you for sharing have a good night and take care 😊 Bernadette and Jack 🐕 xxxxxx 🌻🌻

I’ve often thought that myself 🤔

Now I know why I survive the winters so well….. my legs are very far from scrawny 😂

I wouldn’t be without my woolly socks either😂

He’s an adorable little bird and doing very well under your care. Love the photos😊

Love Robin's visiting me. I like to think it's My mum or Dad . Fab pictures . Have a lovely day xx Sheila 💕🥰

I think along those lines too x

Aww cute little fellow. Lovely to see them develop. I keep walking to the local pond to see how the ducklings and Moorhens are developing. X

You must be providing a safe and good environment for him/her. Its so lovely to see and understand why you feel so protective. Thank you for sharing these lovely photos x

Lovely photos. Thanks for sharing.

Aww! Lovely. The Robin is my favourite bird.

Love robins. The American robins are not so dainty 🐞

I didn’t know that 😃 in fact I didn’t even know there were robins in America .

They are about the size of a thrush without a proper red breast. 🐞🐞

I just googled them , they’re beautiful birds 😍 apparently named robins because of the colour of the breast feathers but a different family to the British robin all together . You learn something every day 😃

That picture has made my day -he is gorgeous thank you so much.I don't know if it's the heat but my usual bird family of robins ,blue tits ,magpies have disappeared from the garden...

Same it’s been quiet in mine x

Thepainterswife in reply to Greenthorn4 months ago

Thanks Greenthorn , I don’t want to bore people but I’m going to photograph his progress weekly until he’s fully mature 😊

Greenthorn in reply to Thepainterswife4 months ago

Bring it on. He could be our mascot.

Thepainterswife in reply to Greenthorn4 months ago

well Maggie-Mae wants him named so maybe we should start a poll ? 😂

Awww how wonderful to watch little miracle of nature in your garden. Used to have robin family years ago..Last 3 years it’s been Great Tit family nested in same box last 3 years .. they start getting their nest ready in January/ February.. so interesting!!.. watching each step like how they work as a pair in and out nest feeding , then when young fledge.

Soooo you must give your little one a name ???

I’ve had boxes up for years but nothings ever used them 🙁 but I think it’s because I have a very high , thick , mature hedge on three sides of the garden and open country with plenty trees on the fourth , they’ve probably got better places to hide in 🤔 I’ve thought of naming him but I’m worried that would make me feel even closer to him , every day I go into the garden and feel such relief when he appears and then we have a little chat ( the neighbours must think I’m crackers ) 😂. If I was going to name him I’m thinking maybe Titch but I’m open to suggestions ?

Right I’m officially opening the Baby Robins suggestion box !!! Apart from the obvious Robbie .. hmmm how about naming him along the lines of your new grandchild??

I’m hopeless with names but I’ve always liked Oliver so if I combine that with my dogs names I think I’ve got a great children’s book title “ In the Garden with Boris , Belle and Oliver Robin “ 😂

Think you have hit the nail on the head!! Oliver !….. kinda suits him 👍

a decent photo of him and you can just see his red feathers appearing 😃 the blue bit at the...

When he explained his errand the doctor was not best pleased, but he picked up his bag and shouted...

small sailing boat like ours and were preparing for his retirement. He was clever and had...

Over 2 years of steroids will it stop?

skull that I reduce my 5mg to zero over the next 2 weeks then a little wait and a blood test to see...