It's Pepper Season: A couple of weeks... - Advanced Prostate... 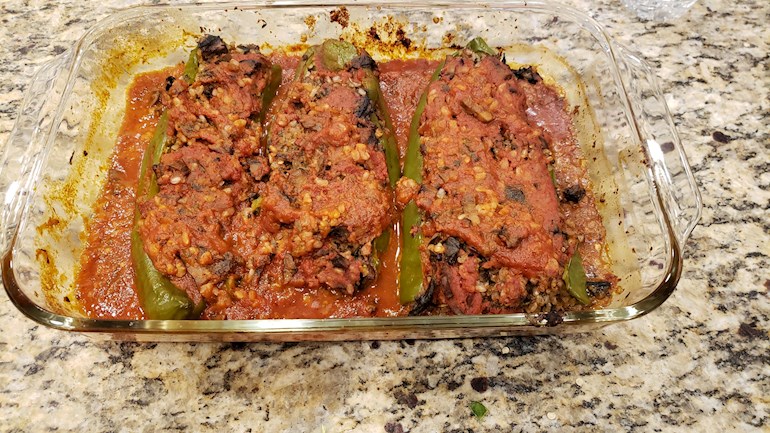 A couple of weeks ago I posted about Red Beets. Today I'm posting about peppers.

The peppers are coming in nice now..starting with the sweet Italian and quickly followed by the hot (serrano. Cayenne and jalapeños)

So I decided to stuff some with organic brown rice, onion, rainbow carrots. garden fresh serrano peppers, beet stems and leaves and a portobello mushroom, parmesan cheese, Italian season, salt and pepper...the sauce i made some time ago.

Looks great ! I do similar with baked Aubergine 🍆 (egg plant )

Yummmmmm yummmm I’ll be right over …..

I had both Serrano’s and jalapeños in my shrimp ceviche day before yesterday. I love both , but in my ceviches I like the Serrano’s to kinda stand out front for their savory flavor with lime juice.

TomTom1111 in reply to Kaliber

You and the hammer are always welcomed. I have to admit and brag a little, these stuffed peppers are fn good.

Kaliber in reply to TomTom1111

I’ll bet they are ..😂😂😂😂😂. It’s just before supper time and I’m salivating Yayahahaha.

Out of the area of my garden for family reunion.. Weeds cover ground and are 4 times as high as peppers, onions, swiss chard, and tomatoes.. may be able to salvage something, but plants are mighty spindly and week. Local farmers market going strong...

TomTom1111 in reply to Shooter1

Gotcha..next year the garden will better.

Sure hope so. Sunflowers are everywhere and shade out everything else except raspberries.. Gallons of them coming off.

TomTom1111 in reply to Shooter1

Wild Raspberries..now that's great. We would eat them and the wild blackberries when we hiked where I grew up...it's all housing developments now but at one time acres and acres of trees and brush.

Roasted bell red, orange and yellow on the grill ...peeled and mixed with oil salt pepper and garlic and pine nuts!!!

TomTom1111 in reply to SPEEDYX

Yes. Would make those with my wife's grandfather..he was italian..so is my wife for that matter. Man are they good...I enjoy with sharp provolone cheese and the oil cured olives...now I'm hungry again.

SPEEDYX in reply to TomTom1111

My most favorite pepper is Long Horn (a spicy, long, wrinkly green pepper) I planted them 3 weeks ago..the plants are now 8 inches tall. I cut the upper most few leaves evry week to make them broad. Hoping to have good crop in 8-10 weeks.The other two varieties I like are Bell peppers and Jalapeno.

Most of us know that peppers contain a big amount of Vitamin C and they also contain an anti cancer substance called capsaicin. So good for us..cancer folks!

TomTom1111 in reply to LearnAll

You are right on the mark learnall...peppers are so versatile and stuffing them like I did here is a nutrious meal.

I'll check out the Long Horn.

Wow, that looks delicious. My kind of food.

What wine do you recommend with that?

TomTom1111 in reply to Gearhead

Definitely a red...I would probably go with a Cabernet.

My lovely wife makes a stuffed pepper with a stuffing made of ground turkey, quinoa, tomato sauce and spices. A unique recipe and delicious! It looks a lot like your picture.

This is a month old but it shows my jalepeno plants survived the winter, which is amazing in Northern California. Now some are turning red. Slightly hot. I chop up and throw into vegetarian spaghetti and Amy's organic medium chili. Also tacos. I discard seeds and white interior. I use plant-based meat.

TomTom1111 in reply to NecessarilySo

How low do the temperatures get in Norther California?

NecessarilySo in reply to TomTom1111

Usually below freezing but this year was 40F at lowest. Climate change? Tomatoes died. Zucchini and other squash died, Peppers survived.

I think you need to grow the "Carolina Reaper" to kickstart your day.

Kickstart it right into the emergency room. There's a YouTube video of two girls attempting to eat one..its hysterical.

Serranos are my favorite and why I grow them. Hotter than a jalapeños not habenero hot...just slightly uncomfortable. Similar to eating salt and vinegar french fries with a cut lip...it hurts but you can't stop eating the fries.

Ha, Ha. Some of the funniest videos I have seen are those of folks eating the "Carolina Reaper".

I have about 32 smart ass comments. But when it involves someone's food, I find that the knives come out. In your case probably a hatchet. It does look delicious

Here are some of our ghost peppers but nobody wants to eat them as they are supposed to be very hot.

I like hot but not crazy hot. If you like hot, grow the serrano...taste like the jalapeños but more heat...I pickle them and add them to my salad, etc.

Will try them next year. Cayenne peppers are growing here too but pretty mild.

Looks tasty, but i bet the real secret is your sauce. What's in it?

I make a marinara sauce....

Extra virgin olive oil, whole onion (chopped fine), carrots (real fine), whole plum tomatoes (can) put through the food process or remove the seeds, garlic, basil , salt/pepper to taste...the key is letting the onions and carrots cook down so they release the sugars..that naturally sweetens the sauce...I'll make 8 qts at a time and freeze in 1 qt containers for later use...like this.

addicted2cycling in reply to TomTom1111

Sounds wonderful!!! Mine includes tomato paste to thicken and add the high amount of lycopene. Straight out of the can is good too.

TomTom1111 in reply to addicted2cycling

I'll add a can of paste if I'm planning in eating spaghetti otherwise no paste.

addicted2cycling in reply to TomTom1111

For this guy my sauce is not just for spaghetti. I make enough for refrigerator and freezer. The refrigerated is ALWAYS READY to just take out and spoon in my mouth -just because- in addition to adding to any meal I make.

Right now I'm having some salad and after fixing it up with my spice/curry mixture I would put in some sauce if home instead of being on vacation. 😄

good wishes through this Christmas and New Year Season to Everyone. Never far from my mind....

We wish you a warm and love filled holiday season

We wish you a warm and love filled holiday season. Our prostate cancer community is like a second...

surprised. I started using the E2 gel 16 months ago after my PSA continued to rise despite having...

ADT may protect against Covid-19

Nalakrats To Begin His Yearly Sabbatical

Time to say goodbye— to Omaha and LU 177